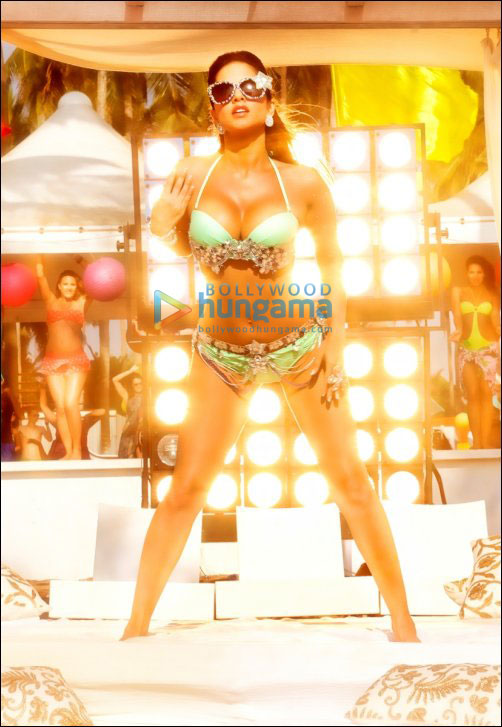 Readers may be aware that Kuch Kuch Locha Hai will see the unusual pairing of Sunny Leone and Ram Kapoor where Ram plays the role of a Gujarati businessman and Sunny will portray the role of an actress.

While the makers always maintained that Sunny's character will be stylish and glamorous, here's a glimpse of her from the upcoming comic caper. The actress is seen posing in a trendy green bikini with floral work, accessorizing it with 'cool' shades with a shiny star and blingy earrings and rings. This is the second time Sunny Leone is spotted in a bikini for the film. Prior to this, the actress was seen in a pink bikini in the first look of Kuch Kuch Locha Hai.

With Sunny Leone's sizzling avatars in the posters, the film has been touted as her second sex comedy (since she will already be seen in Mastizaade). However, vehemently denying the buzz, director Devang Dholakia is quick to correct the perception, "My film is not a sex comedy. It is a sexy comedy and there is a vast difference between the two. The humor is very tongue in cheek and will cut across all age groups. The characters are all identifiable and have you rooting for them from the word go. All my actors have done an outstanding job and the film is now in post production."

Kuch Kuch Locha Hai is scheduled to release on May 8.