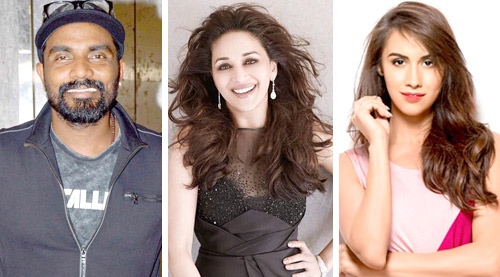 she left her home in Arizona to be part of Remo's feature film ABCD in 2013.


Thereafter Lauren enthralled not just the public with her picture-perfect latkas and jhatkas on Jhalak Dikhaa Jaa, she also caught Remo's undivided attention, as he was a judge on the show.

Not surprisingly ABCD 2 has a substantial role for Lauren, parallel to Shraddha Kapoor. Lauren enters the plot in the second-half but stays in the limelight till the end, sharing ample screen space


What comes as a surprise is that Lauren's role is very clearly inspired by Madhuri Dixit in Yash Chopra's Dil Toh Pagal Hai. In that film Madhuri had played a skilled dancer who is brought

in by Shah Rukh Khan as replacement in a dance troupe after Karishma Kapoor injures her foot.


In ABCD 2 exactly the same situation is recreated in Varun Dhawan's dance troupe when Shraddha Kapoor suffers a leg injury and Lauren steps in to do the needful.


While Remo reluctantly admits that the Lauren's part shares resemblances to Madhuri Dixit's Lauren very happily sees her role being inspired by Madhuri.


The actress recently seen in the fiasco Welcome to Karachi says the response to her role has been very encouraging. "As of now I've not signed anything after ABCD 2. I've been getting

messages from casting directors and producers since the release. I have my fingers crossed. I haven't really got a script that I want to do."


Lauren is grateful to the makers of Welcome To Karachi. "That film put me up there. But this (ABCD 2) is the first time I've been noticed."


The single girl in Mumbai confesses she misses her family back in the US. "I start getting restless after every six months. With all the work here it is getting difficult to make that trip back


However Lauren has no regrets. "I've become a completely different person after moving out of home. It's truly a blessing."