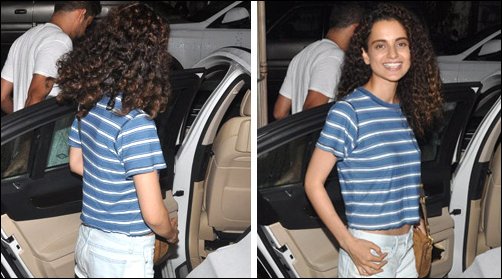 With the weekend giving way to yet another Monday, we at Bollywood Hungama are also back with our entertaining quiz show Guess Who, which is better known as 'World's Envy, India's Pride'.


This week's mystery guest is someone who has been recently crowned as the 'Queen Bee' in Bollywood. Her trademarked wavy-curly curls are making every heads turn. She is the one who just 'Returned' with the second part of her 'wed-ding'. Despite being an 'old school girl', she has adapted to the modernisms of Bollywood and how! The craze of her fan following is so massive that nobody wants to be 'katti' with her, because, everybody wants to be 'batti' with her! Media reports also state that, she is someone who strongly opposes gender discrimination. Reports also cite an example in the form of her childhood incident stating if her father would gift her brother a plastic gun and get a doll for her, she would not accept that. Rather, she would question the discrimination". Well, that's our mystery lady for you...


If you think you know who we are talking about then go ahead and give this week's 'Guess Who' a shot and post in your answers below: