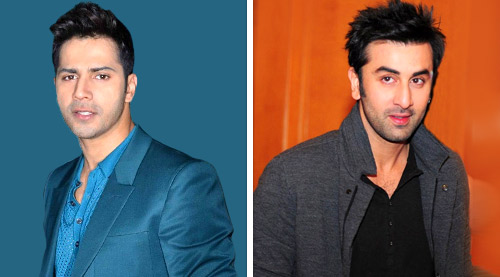 Consider this: so far, Varun Dhawan has had five releases (and no flops), and apart from his debut

movie Student Of The Year and his dad David Dhawan's film Main Tera Hero, his last three films have had

music by Sachin-Jigar (even though they were part composers of Humpty Sharma Ki Dulhania).

What's more, all these films have had music that was popular-Badlapur (whose music struck a chord even before the

film's release) and ABCD2 (whose music will make a greater impress now that the film has clicked).

With the composers of two of his three films to come, Dhishoom (directed by brother Rohit Dhawan) and

Shuddhi directed by Karan Malhotra, yet to be announced (Dilwaale has Pritam), and two unconfirmed films in

the planning stage, we have to see whether this equation grows.

Consider this also: Ranbir Kapoor has been around for almost eight years, but his only hits have been with

Pritam-Ajab Prem Ki Ghazab Kahani, Raajneeti (Pritam had just one song here, but it was filmed on Ranbir),

Barfi! and the biggest of them all-Yeh Jawaani Hai Deewani. As insiders know, Rockstar, Wake Up Sid!

and Rocket Singh-Salesman Of The Year were not hits at all, in terms of the recoveries of investment for

Jagga Jasoos, which Ranbir also co-produces, has the actor playing safe-as Pritam composes for both.

Do these two cases signify, in this low-hit era, the return of the formidable star-composer combination? Even Emraan

Hashmi, who has had a flop run since 2012, is seemingly not taking any chances. Both his forthcoming movies,

Azhar and Budtameez Dil, have music by Pritam, with whom he had a hit (musical) run since Gangster

with Jannat, Tum Mile, Once Upon A Time In Mumbaai and Jannat 2. Emraan's English movie that still has to

release in India, Tigers, has Pritam too!

Says Ranbir, "I want to stress that a composer's contribution to an actor's career is really underrated. Thanks to

Pritam, I am in such a good space. Dada (Pritam) is really amazing. He is not a show-off and his songs are melodious and

aimed at the common man. I make it a point to send him a thank-you note each time he gives a great song to me, including

the single Bheegi si bhaagi si that he made for me in Raajneeti."

The music director-actor association, on the whole, however, has dwindled recently-the last well-known example that still

continues to an extent being Salman Khan's attachment to his own proteges Himesh Reshammiya and Sajid-Wajid.

Two reasons stand out for this phenomenon: one, as Ranbir also said, "Actors are doing very few films today compared to

the past". The second reason is the reduced importance given to this vital aspect of a film: music. This in turn has

resulted in multiple phenomena: one, many music makers work on one film, two, music directors being confused or off-

track, some rusting because of too less work, others burnt out easily by the work and psychological pressures, and three,

monies to music makers are comparatively less, resulting in easy ways out like bad or cheap singers, mediocre tunes and

so on. Last but not the least in this category is everyone trying to be a Salman Khan in discovering 'new' talent-

regardless of outcome quality.

Music often sets the tone of the film. A good song enhances everything about the script and the sequence, from the mood

to the star's performance, especially in romantic scenes. And, mind you, this paragraph is not me but Deepika Padukone

of the top stars besides Salman Khan are musically inclined like the stars of the past: Aamir Khan freely changes music

composers in the few films he does, Shah Rukh Khan moves from composer to composer as per the times (Jatin-Lalit were

dropped as they lost their confidence, coherence as a team and creative juices, Anu Malik was considered outdated despite

in 'experimentation' and multi-music directors including those he 'mentors', and Ajay Devgn and Hrithik Roshan have no

After all, if a composer makes a star's fortunes skyrocket, the star too contributes to the music director's status and

they together make for a high-end combination that delights all, enriches each other and also boosts film and music

As we also said earlier, how many of today's actors actually have musical images, like the legendary Raj Kapoor, Dev

up more than 100 films with a single composing entity, Laxmikant-Pyarelal, stating "I was very comfortable with them!"

And frankly, even many heroines had musical images, and even if by default, ended up forming hit combinations with one or

more composers, like Nargis, Sadhana and Saira Banu with Shankar-Jaikishan, Meena Kumari with Roshan, Nanda with

maintained. This team- spirit made confidence surge, and thus, so did musical standards, box-office performances and

So, to return to where we started: let us hope such musically-satiating teams are set to revive, because we can really do

with high expectations and some good melodies in today's arid times.