The New Year has begun and a couple of films have already hit screens, but the big ticket films are yet to see the light of day. Like every year, this year too we at Bollywood Hungama quite literally are sticking our necks out vouching for these films, which in all likelihood will be big money spinners at the box office. 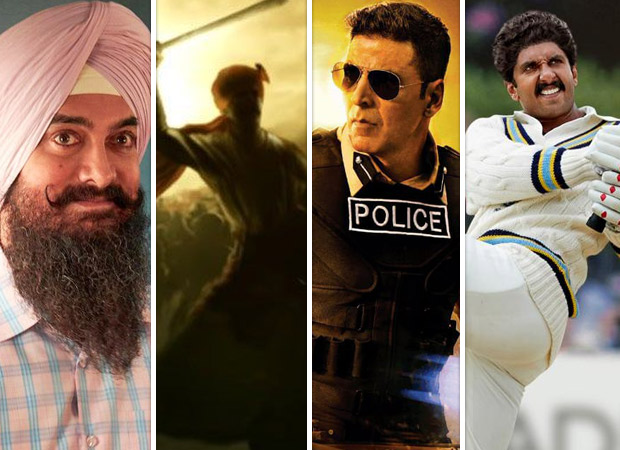 Laal Singh Chaddha: Aamir Khan has over the year carved a niche for himself in the industry and in the audiences’ minds. With just a single release a year, the actor ensures to focus everything on that single project making it that much more intriguing to watch. Now, in 2020 Aamir Khan will return to the big screen after a two year gap (his last release being in 2018 with Thugs of Hindostan), with Laal Singh Chaddha.

But if just Aamir Khan wasn’t enough, the film is an adaptation of the Tom Hanks film Forrest Gump that has today achieved cult status. Besides this, given the buzz surrounding the film and the anticipation to watch Aamir essay Tom’s character in the Indian version, trade estimates predict that the film could well see collections in excess of Rs. 250 cr.

Prithviraj: Over the past few years, Akshay Kumar has emerged as one of the most bankable Bollywood actors with each of his films achieving box office success. In 2020 we see Kumar delve into a period drama with the film Prithviraj. Base on the life of King Prithviraj Chauhan the film is being produced by Yash Raj Films and helmed by Chandraprakash Dwivedi.

Given the content of the film its cast and production banner, trade expectations state that Prithviraj will be mounted on a lavish scale. If what we hear is anything to go by, the content coupled with Akshay Kumar’s star power at the box office is sure to propel the film past the Rs. 200 cr. mark at the box office.

Sooryavanshi: After featuring in four releases in 2019, Akshay Kumar will be seen in multiple films this year as well. Following Prithviraj, the next Akshay Kumar starrer that is expected to rake in the moolah is the cop actioner Sooryavanshi.

Coming as the yet another cop film from Rohit Shetty after Singham 1& 2, and Simmba, Sooryavanshi not only boasts of Akshay Kumar but also features cameos by Ajay Devgn and Ranveer Singh in their respective avatars. Given this, it is safe to say that Sooryavanshi might just go past the Rs. 200 cr. mark at the box office.

’83: What do you get when you take one of Bollywood’s leading entertainer directed by a maverick visionary and have them work together on a project based on the country’s biggest sporting win? The answer is simple, you have ’83, starring Ranveer Singh, directed by Kabir Khan and based on India’s 1983 Cricket World Cup win.

Now, this film combines Indians’ love for cricket with their love of entertainment creating a visual spectacle that is sure to enthral. Knowing this, it comes as no surprise that trade pundits are predicting big box office numbers for ‘83. 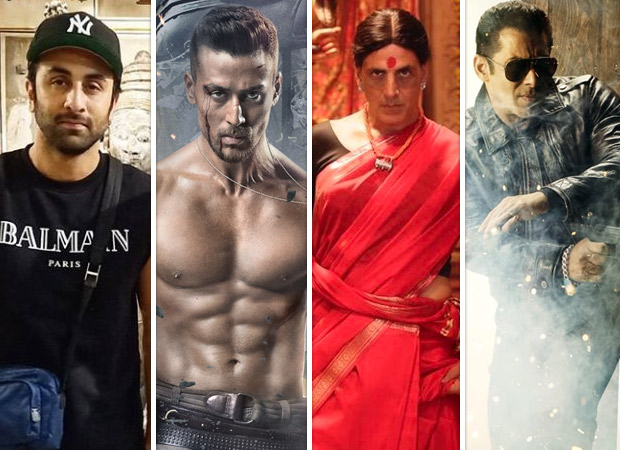 Brahmastra: In 2018 Ranbir Kapoor was the toast of the industry after his film Sanju, which was based on the life of actor Sanjay Dutt stunned everyone at the box office. Two years later and he will be seen sharing scree space with Alia Bhatt in an Ayan Mukherji directorial Brahmastra.

Though the film has been in the making for a while now, the buzz surrounding it seems to be increasing by the day. Boasting of a stellar cast with a rather intriguing concept the film is one of the most keenly anticipated releases. Given this fact, estimates suggest that the business of Brahmastra could easily reach Rs. 150 cr.

RRR: Post the success of Baahubali – The Beginning and Baahubali 2 – The Conclusion, director SS Rajamouli is working on his next RRR. Said to be bigger and grander than his previous cinematic out RRR not only has some of the biggest names from the South, but also from Bollywood and Hollywood. This massive star cast coupled with a stellar story and of course Rajamouli’s direction surely makes this film one of the most anticipated releases of 2020.

Laxmmi Bomb: Yet another south remake that Akshay Kumar will feature in is Laxmmi Bomb. Written and directed by Raghava Lawrence the film is said to be a Hindi remake of Lawrence’s film Kanchana.

Going by the buzz that surrounded Laxmmi Bomb after the release of its poster, trade predictions claim that the film could easily achieve the Rs. 150 cr. mark at the box office.

Shamshera: In 2018 Ranbir Kapoor featured in the title role in the Rajkumar Hirani directorial Sanju. Based on the life of actor Sanjay Dutt the film went on to rock the box office setting new benchmarks. Two years later, the Kapoor scion returns with a period action adventure in the form of Shamshera. Produced under the banner of Yash Raj Films, Shamshera comes with immense buzz especially since the film is being mounted to a massive scale.

However, it isn’t only the scale of the film, but also its star cast that has the audience anticipating its release. Alongside Ranbir, Shamshera also stars Sanjay Dutt and Vaani Kapoor.

Baaghi 3: Back in 2016 we saw the release of the film Baaghi that saw Tiger Shroff indulge in some death defying action. Two years later Sajid Nadiadwala produced a second instalment with Baaghi 2 that saw Tiger take the lead once again. Now egged on with the stellar box office performance of the first two action thrillers Nadiadwala and Tiger are reuniting for Baaghi 3 which promises to be that much bigger.

Besides this, given Tiger’s recent success with War, trade expectations are that seeing him in an action avatar yet again will certainly be a treat for the audience. Thanks to this early estimates state that the film could easily make it past the Rs. 150 cr. mark at the box office.

Radhe – Your Most Wanted Bhai: After their association in Wanted, and Dabangg 3 Salman Khan and Prabhu Dheva are reuniting for Radhe. Yet another Salman Khan action extravaganza, the film which is slated to hit screens on Eid 2020 promises all the punch and thrill that is associated with a conventional Salman starrer.

This coupled with the fact that Salman Khan films that release on Eid usually manage to do well at the box office, is a reasonable indicator that Radhe will cross the Rs. 150 cr. mark. 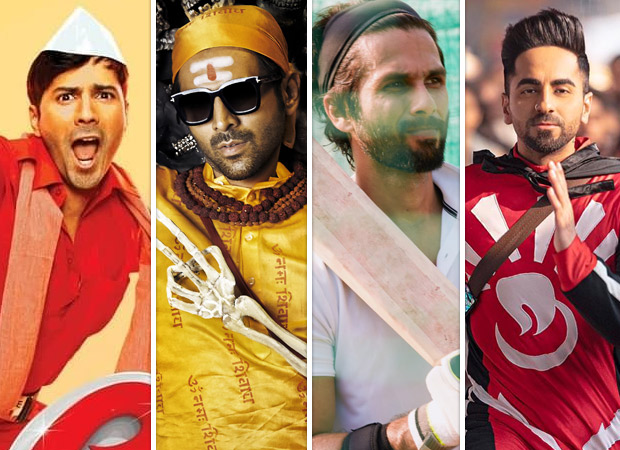 Coolie No 1: Varun Dhawan has fast garnered a fan following that can rival most Bollywood actors. This ardent following Varun has is thanks to his attitude, acting prowess and of course his entertaining persona. Now imagine this actor starring in a remake of what is now considered a cult movie, and one has the recipe for success. This is exactly what Coolie No 1 is.

Looking at the current trend, estimates state that Coolie No 1 could reach Rs. 100 cr. at the box office if not more.

Bhool Bhulaiyaa 2: What happens when you combine the current youth heartthrob Kartik Aaryan and Anees Bazmee, who is known for his comic capers together? Well the answer is Bhool Bhulaiyaa 2.

Jersey: South remake seem to be the flavour of the season for Shahid Kapoor. After his success with Kabir Singh which was a remake of Arjun Reddy, Shahid has now commenced work on another south remake Jersey. Interestingly the film will combine India’s passion for the sport of cricket with Bollywood which essentially translates into a wider audience. Given these facts, trade expectations are that the business of the film in all likelihood will go past the Rs. 100 cr. mark.

Shubh Mangal Zyada Saavdhan: After the critically acclaimed film Shub Mangal Saavdhan that shot Ayushmann Khurrana into the limelight we see the actor return with a sequel. Known for his high on content film Ayushmann has fast become an audience favourite. Thanks to his unconventional mix of content and entertainment, Ayushmann has managed to create a new formula for box office success. 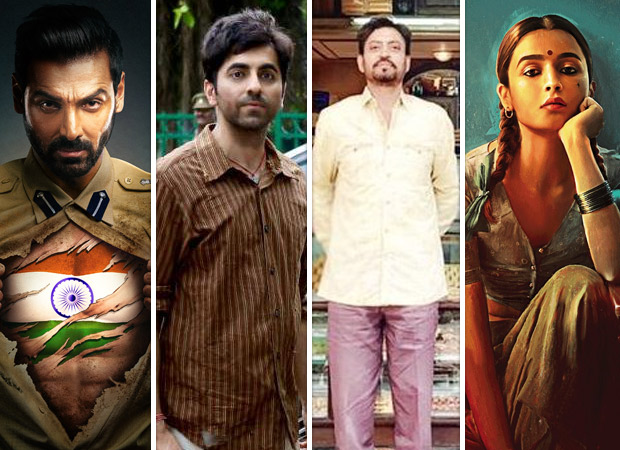 Satyameva Jayate 2: After the success of the 2018 release Satyameva Jayate, John Abraham returns to the big screens with the sequel Satyameva Jayate 2. Like the first this one too boasts of high octane action and stunt sequences that will see Abraham doing what he does best. Going by the current buzz surrounding the film trade experts state that Satyameva Jayate 2 has all the markings to emerge as a sleeper hit.

Maidaan: Ajay Devgn seems to be on top of his game, with multiple hits under his belt, the actor recently commenced work on his sports film Maodaan. Based on Indian football coach Syed Abdul Rahim, who led the Indian team to the semi-finals of the 1956 Melbourne Olympic Football tournament making India the first ever Asian country to achieve this place. Given the film’s subject matter and the buzz surrounding it, Maidaan could emerge as one of the sleeper hits of 2020.

Gulabo Sitabo: Starring Amitabh Bachchan and Ayushmann Khurrana the film is directed by Shoojit Sircar, however not much about the story of the venture is known, but given the cast and the director the trade predicts that this film could turn out to be a big one at the box office.

Angrezi Medium: Irrfan Khan is one actor who is known for the roles he plays and the performances he gives on the big screen. After the success of English Medium, Irrfan returns for a sequel of sorts with Angrezi Medium. Now given the success of the previous venture, expectations are that the sequel that much like the first deals with current topics will definitely strike a chord with the audience propelling the film at the box office.

Gangubai Kathiawadi: A biographical crime film directed by Sanjay Leela Bhansali starring Alia Bhatt is exactly what Gangubai Kathiawadi is. While one is known for his opulence in films that brings stories to life the other is known for her performances that give character meaning and depth. Combine these two and you have a success story. But if that wasn’t enough, the buzz surrounding the film and the response the first poster has received promises that Gangubai Kathiawadi could easily be a big ticket money spinner this year.

Roohi Afzana: Comedy horror is a rather less explored genre; however off late we have seen Indian filmmakers venturing into this territory. Now the latest is the film Roohi Afzana starring Rajkummar Rao, Janhvi Kapoor and Varun Sharma. Though nothing much is known about the film, Roohi Afzana could make a mark at the box office thanks to its cast and fresh pairing.

Attack: Action thrillers are usually rather bankable film concepts at the Indian box office. But Attack takes it a bit higher featuring John Abraham who has fast become a rather prominent fixture for action films. Alongside Abraham the film will also feature Jacqueline Fernandez and Rakul Preet Singh, directed by Lakshya Raj Anand the film tells the story of a hostage crisis that is inspired by true events. Given these facts Attack that has all the ingredients of hit might just set the box office register jingling.

Tanhaji – The Unsung Warrior: The Ajay Devgn – Saif Ali Khan starrer Tanhaji – The Unsung Warrior has been making all the right moves in the run up to its release. Telling the story of a rather unknown hero this period drama has all the markings of a hit. And aiding the film further is the fact that both the lead actor’s performances have been appreciated by the audience.

Given these facts, trade expectations are that Tanhaj – The Unsung Warrior might just emerge as a money spinner at the box office.

NOTE - The article was written in first week of January 2020 and published on 28 January 2020; hence Tanhaji - The Unsung Warrior, though released on 10 January 2020 finds its mention in the Dark Horse category as envisaged at that point in time.