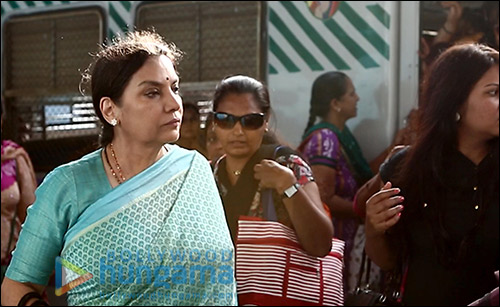 Veteran actress Shabana Azmi recently decided to travel in crowded locations of Mumbai in order to research for her character in the upcoming film Chalk n Duster. As a part of the preparation, Shabana travelled by train to get a first-hand experience of how it feels to be a commuter in jam packed compartment on a weekday afternoon.

Chalk n Duster is about teachers, the education system and the commercialization of the system in the country. The actress, who plays the role of a middle class teacher in the film, travelled from Andheri to Virar with her entourage to see how it feels to be a middle class teacher, to endure their pain and struggle. She also got in a heart-to-heart chat with a few fellow commuters and learnt about their daily endeavors to reach work in time. It was a refreshing journey for the former National award winning actress. Talking about the experience, Shabana Azmi further elaborated, "I experienced the train ride in order to understand what it is that women, particularly working women have to face while commuting daily. What it does really is to make you have a deep empathy and respect for working women who have to travel such long distances after they have worked to then go back home and then continue with the rest of the work. It can be quite rough particularly if you are travelling by third class."

On the other hand, Shabana revealed that she has always been travelling by public transport especially during her younger days as a school kid and teenager. She said, "I took the Suburban train because I have always lived in Juhu and I used to go to Queen Mary's High School which was all the way in Grant Road. Then in college, I used to go again to all the way to St. Xaviers (C.S.T.) and the train was the best form of transport. So, I have very dear and fond memories but obviously in later years, one hasn't been able to travel by a train. I remember doing it for a Basu Chatterjee film several years ago. But now, for the experience of the character, we took some group members in a guerilla kind of way without letting anybody know.

Being a social activist, she also spoke about trains as the best medium transport in Mumbai, saying, "I do think that in terms of public transport, train is the best means. The train has been something that has commuted to thousands of people from work to home and we are grateful that in a city like Mumbai we have very good public transport as compared to the rest of the country."

Chalk n Duster is written by Ranjeev Varma and directed by Jayant Gilatar. It stars Juhi Chawla, Zarina Wahab, Divya Dutta in major roles along with Anupam Kher, Jackie Shroff, Sameer Soni and Arya Babbar in pivotal roles and is produced by Subhash Singh and Sonali Singh under the 3S Creations banner.