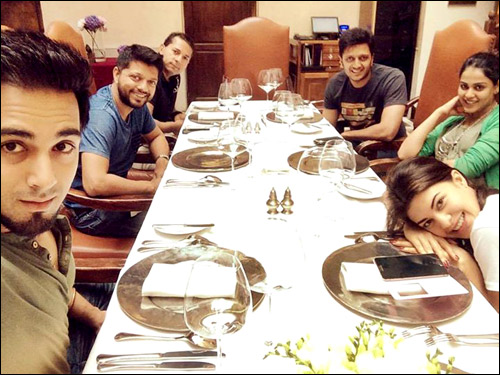 Coming from the stable of Farhan Akhtar and Ritesh Sidhwani's Excel Entertainment is a quirky film titled Bangistan which stars Riteish Deshmukh and Pulkit Samrat. While the film is gone on floor recently, we caught the cast of the film having fun together during their shoot schedule.

Recently actor Pulkit Samrat, who debuted in Bollywood with Bittoo Boss in 2012, posted a picture on his Facebook page with the entire cast and crew of Bangistan. Pulkit clicked a selfie with his co-stars of Bangistan, Riteish Deshmukh and Jacqueline Fernandez, Riteish's wife and former actress Genelia D'Souza, director Karan Anshuman and N Kassim. Pulkit wrote, "Lunch Time.. So Riteish Deshmukh loves the architecture here.. Genelia the lovely sis.. Jacqueline Fernandez loves the "table" .. Our director all smiles enjoying the off day.. N Kassim is our one man team! We all have our roles here!" This picture also gives us a glimpse of Pulkit's new look where he is sporting a beard.

Bangistan is a satire which will have Riteish Deshmukh and Pulkit Samrat playing the roles of aspiring suicide bombers. Though the film will not have any leading ladies, Jacqueline Fernandez will be doing an extended cameo where she will be seen dancing as well as doing a few scenes with the actors. Bangistan will be majorly shot in Poland and Polish actors Cezary Pazura and Tomasz Karolak have been roped in to play prominent roles in the film.

Produced under the banner Excel Entertainment, the film will mark the debut of journalist and film critic Karan Anshuman as a director. Bangistan is slated to release on April 17, 2015.

Mandana Karimi shares a message about self…