Last Updated 15.08.2022 | 3:26 PM IST
feedback language
follow us on
Bollywood Hungama » News » Bollywood Features News » ’83: This photo of Ranveer Singh and Kapil Dev together is making us curious about the Kabir Khan film!

The anticipation is definitely increasing by each day as we get more glimpses of the Kabir Khan film ’83 based on the historical win of India’s first World Cup. The film will feature Ranveer Singh in the role of the then Indian cricket captain Kapil Dev. Obviously, the Gen Y superstar is also getting trained under this legendary cricketer and we recently got a glimpse of the film. 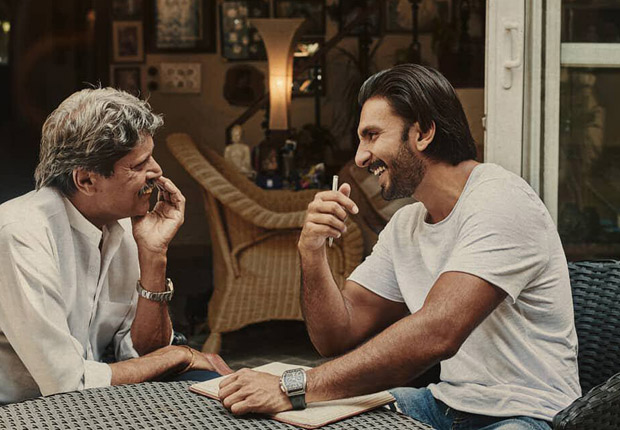 ’83: This photo of Ranveer Singh and Kapil Dev together is making us curious about the Kabir Khan film!

Earlier this year, after Gully Boy, Ranveer Singh had taken off to Dharamshala for the training session of the film. Not only has the actor learnt the sport extensively for the film but he will also be learning the nuances of Kapil Dev and his cricket styles. Besides him, the entire team of ’83 which also includes other actors playing cricketers like Tahir Raj Bhasin, Saqib Saleem, Ammy Virk amongst others were a part of the Dharamshala schedule. Coming to this, it seems that Ranveer and Kapil had a hearty session regarding the film and the prep seems to be on in full swing!

Even prior to this, we had seen Ranveer Singh taking cricket lessons with Kapil Dev as they were sporting the Indian cricket jersey and practicing on the grounds in Dharamshala.

Coming to the film ’83, the film is directed by Kabir Khan and it is expected to be extensively shot in India and abroad, in London. An extensive workshop will be held at the England capital too before the shooting commences.

Also Read: Ranveer Singh and his Team India get ready to meet the other ’83 World Cup teams for a final training schedule