Adivi Sesh has been touring the country to promote his upcoming film Major and has been winning hearts along the way. A clip from one of the film’s screenings with para-military officials has gone viral, leaving fans overwhelmed with the touching moment the star shared with an officer in a wheelchair who was extremely moved by Adivi’s performance in the film. 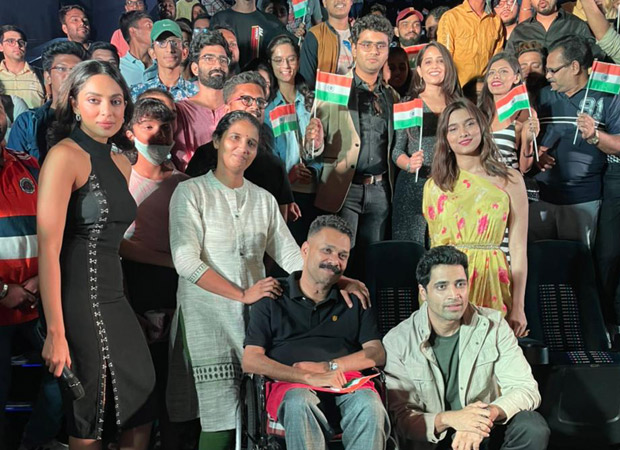 With Major, Adivi Sesh steps into the shoes of Major Sandeep Unnikrishnan, honoured for his bravery and sacrifice in the 26/11 Mumbai terror attacks and left audiences in tears.

The first preview screening of the film in Pune opened to a full house and ended with a stand ovation, waving tri-coloured flags and many emotional touching moments as loud chants of ‘Bharat Mata Ki Jai’ and ‘Vande Mataram’ echoed across the room.

A para-military officer in a wheelchair was also present at the screening and was in for a surprise when Adivi Sesh himself knelt down to speak to him and thank him for his support. The Officer saluted him and was in tears with Adivi’s gesture, while the rest recovered from the emotional experience that left them with goosebumps and tears. The actor chose to flag off the tour in Pune, as that was the city Major Sandeep Unnikrishnan got his start as a soldier.

Based on the life of Major Sandeep Unnikrishnan, the decorated NSG Commando who perished while saving dozens during the 26/11 attacks, Adivi Sesh portrays the titular role and was unanimously praised by fans and audiences for portraying the major with utmost dignity and grace.

Adivi Sesh captured everyone’s attention with his acting prowess and striking similarity to the major as he brought his story to life on the big screen.

ALSO READ: REVEALED: Complete schedule of when and where you can watch Adivi Sesh-starrer Major in the pre-release screenings