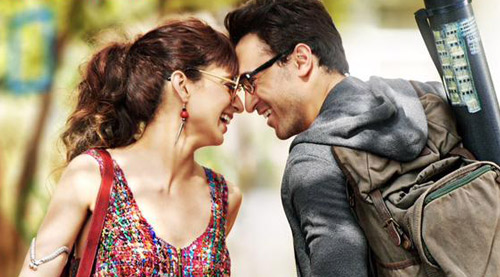 time-just because the film's narrative sags in parts.


Dullness is not a crime in the movies. Dishonesty is. And Nikhil Advani's juvenilely but aptly named Katti Batti (the two words used by school kids when they fight and make up) doesn't have

a single untruthful moment in it.


You may not flow with or even agree with the plot's infuriating take on unrequited love. And you may even find the concept of a lovelorn Majnu with a perpetual hangdog expression and a pet turtle

to tend to, a bit too much to take. But this guy Nikhil Advani who gave us his take on a hardcore massy love story last week, means business.


Now take this. Katti Batti is a rom-com which takes its couple through a maze of hand-crafted situations which smack of self-indulgence. The plot is populated with proof of how 'cool' it is

to be open about bodily functions in an urbane relationship. In fact the story displays a shrink-worthy fascination with the potty and its activities.


So after the smitten and stupid Maddy (named, we presume, after Kangna's favourite co-star) and his friends scream themselves silly over a cricket match on television, Payal harangues him on how he

must aim his "little soldier" in the toilet bowl and not shoot off all over the place. The scene, meant to be, a sitcom slide-in for a rom-com. Ends with Maddy presenting Payal with a packet of


The above sequence is played out in two versions: his and hers. And one of this quirky capricious rom-com's side delights is the way Advani and his co-writer Anshul Singhal weave episodes out of

the Maddy-Payal love story in a way that we see it flow in a non-linear but coherent cascade of readily identifiable anecdotes.


Some of these episodes, like the one where Maddy drops Payal off at the airport fights and dumps her, work well. Others like that whole lengthy sequence where Maddy's parents are conned into being

pacified with subverted scenes enacted on stage from Sanjay Bhansali's Devdas are laboured and unconvincing.


This unevenness in the quality of experiences shared between Maddy and Payal serve the unexpected purpose of imbuing the relationship with a vast array of variables. What if...That's a constant

idea underlining the relationship, so that even when the going gets plodding the plot has us smiling and nodding.


Advani, with a great deal of help from his cinematographer Tushar Kanti Ray and background scorer Gulraj Singh, frames the romance as part-fantasy, part-reality with the couple embracing the idea

of love with credible intensity.

What works is not so much the mythical 'chemistry' between the lovers as their search for that elusive meeting-point where two people can co-exist without going batty over the potty. Imran Khan is

effective in playing the bullied lover-boy. Here his character pulls out all stops and goes to embarrassing lengths to get back the fey unpredictable girl who just can't be confined in a

relationship. Khan portrays with honesty his character's pathetic desperation to win the girl. He falters in the more dramatic moments. But that's okay. We expect that from Maddy.


Kangna's fans (who I believe number a huge population) would be impressed by her ability to embrace another quirky character. Her various hairstyles do a lot of the emoting on her behalf. Props

apart as an actor she comes into her own in the last 30 minutes when Advani, with considerable help from Aamir Khan, turn on the tear taps.


There is a bewildering but not-objectionable incongruity to the way the film manipulates a tragedy into the lovers' life almost as an after-thought. And yet that idea of unfulfilled love, so mocked

earlier in the Devdas skit in the plot, doesn't stand apart from the rest of the film.


The scenes between Ranaut and Khan in the end are tender and evocative. I especially liked a moment at an outdoor wedding where Imran has to return Ranaut's pet turtle to her. The look in her eyes

as she takes charge of her pet suggests a heartbreaking finality.


Katti Batti is not a great film. But it's done with a lot of heart. There are many limp episodes in the plot and marginal actors who come and go preteding to be more important to the plot

than they really are. But it all holds together at the end. Because love, you see, conquers all. Specially when it comes from a sincere place in the heart.


You may accuse Nikhil Advani's film of being dull in parts. But never does he fail to lift a scene with his sincere faith in the power of love to heal and nurture the human spirit. This is an

intimate funny quirky rom-com about love life and, yes, the loo. Stylishly shot and packaged, it keeps our interest alive to the finale.


The climax is, in one word, killing.