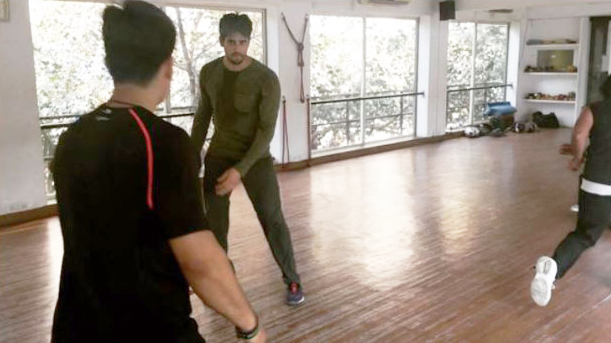 Sidharth Malhotra and Jacqueline Fernandez starrer A Gentleman is making noise for all the right reasons – whether it is for the hero’s high octane action or whether it is for the actress’ graceful pole dance moves. While we got a glimpse of the training that Jacqueline had to undergo to pull off the dance in the song ‘Chandralekha’, here’s a sneak peek into the actor’s prep for action for the same film.

Earlier we had reported that an international stunt co-ordinator for choreographing the action moves for the film. It was later revealed that Cyril Raffaelli known for his work in his films like Transporter, The Incredible Hulk and even the Bollywood hit Baby, was roped in for A Gentleman. Asserting the same and expressing his thanks towards the talented artist, Sidharth Malhotra shared a video of one of his practice sessions.

Sidharth Malhotra posted the said video saying, “#AGentleman action training all thanks to Cyril Raffaelli! Our action choreographer #throwback.” Readers may be aware that Sidharth will be seen two diverse roles of the Susheel Gaurav and Risky Rishi in the film but whether it is a double role or no, one would know only after watching the film.

A Gentleman - Sundar, Susheel, Risky is directed by Raj Nidimoru & Krishna DK and it is slated to release on August 25.