The team of Karan Johar directed Rocky Aur Rani Ki Prem Kahani seems to be having a blast shooting for the film in Delhi. Headlined by Ranveer Singh and Alia Bhatt, the film also stars Dharmendra, Shabana Azmi, and Jaya Bachchan. With Manish Malhotra weaving magic with his designs, and Farah Khan making the magnificent cast dance to her steps, the film is already on the list of most anticipated movies. 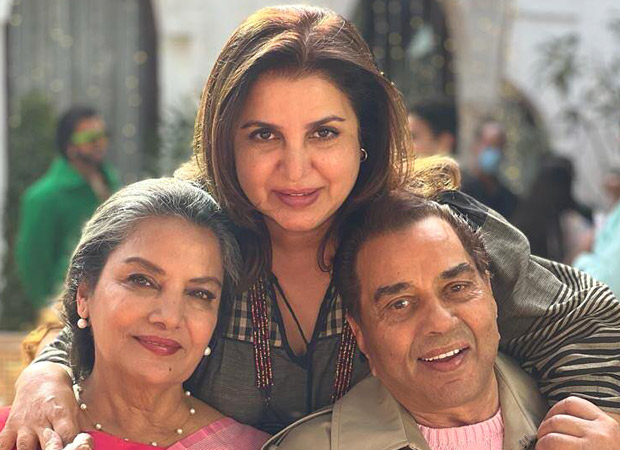 The team has been sharing videos and pictures capturing the fun moments on the sets of the film. Recently, Shabana Azmi took to her Instagram handle to share a lovely picture with Dharmendra and Farah Khan. In the picture, Shabana is seen in a pink saree and pearl jewellery while Dharmendra is seen sporting a pink sweater and a brown coat. Farah is seen in casuals holding a mic in the picture. The picture seems to have been clicked between shots on the sets of the film.

Sharing the picture, Shabana wrote, "With the effervescent #Farah Khan Kunder and the poetic #Dharmendra it's been a good ride".

Meanwhile, Shabana Azmi essays the role of Alia Bhatt's grandmother in the movie and has shed 10 kilos for the film. She will be seen as a very sophisticated upper-class woman in the film and will be seen wearing exquisite clothes designed by Manish Malhotra.

Slated to release on February 10, 2023, Karan Johar's film will mark his return to direction after Ae Dil Hai Mushkil five years ago.