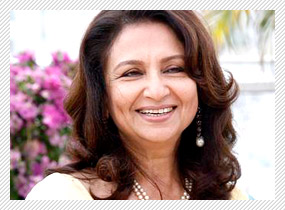 Sharmila Tagore on the commodification of womenâ€¦

"I think we need to judge commodification in the given context. The problem is of individual contexts. A woman is free to say yes or no to the way she's projected. But we don't know what the compulsions are for what girls do on screen. Sometimes they're too young and naÃ¯ve to know where the camera is placed and how they're captured.

But women can be commodified even in a wedding sequence. And why single out women? Even men are being commodified. And women are commodified in endorsements and advertisements even when they are clothed from head to toe. In the ads, we see men selling motorcycles and cars while sari-clad women sell washing machines and aqua guards. Isn't that sexist?

These so-called offensive songs are in the public domain and are played openly and unabashedly in weddings and other celebrations. Women are seen dancing to these songs. Then when the same songs are released on film then they become a problem ...I think the same logistics should be applied both on and off screen. The women need not be the provocateur. The women are not volunteering to do these songs. They are an indication of the patriarchal construction. If an actress says yes to an item song, she doesn't become unworthy of respect.

I think we have to forget this 'man can do anything and women cannot' mindset. If a woman enjoys doing a certain thing on screen, it's her prerogative. You don't have to go and see her. Why be judgmental about it? Men do a lot of vulgar dances. I recall some of Govinda's dance movements. But they were not condemned at all. But if a woman does it, she is looked down upon. This is double standard. Why do we expect women's morals to be on higher plane than the men? Women have to wear overcoats and protect themselves from the male gaze while men can wear whatever they like. These moral values do not resonate with today's times. I am not exonerating sexism, or the songs of Yo Yo Honey Singh. All I am saying is, we need to revisit these values applied to men and women and not just pass on judgment on an ad hoc basis. For example Jonathan Kaplan's The Accused had an explicit rape scene. But the film was not sexist. If a woman is enjoying herself and her space on screen there is nothing wrong with it. There's nothing fundamentally wrong with being an object of desire. You don't have to live up to certain moral standards to get your right to security. To say prostitutes are not worthy of respect and can be raped is outrageous. That mindset has to be changed. Every individual has equal right to self projection. We must not blame media images for the way women are treated in society. There are deep socio-economic factors that are causing violence against women. We have to look not at the images but at society itself. Actually, sexism cannot be related to sex-related crimes."