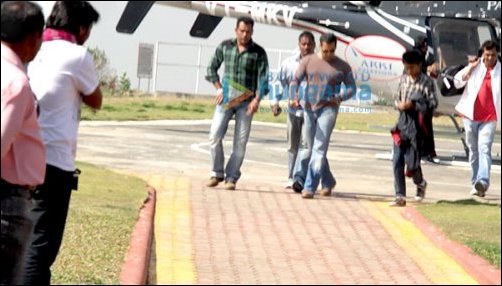 Salman Khan made a heroic entry in a helicopter on the sets of his forthcoming film Bodyguard in Pune. Sallu, who was actually in Jaipur for a charitable event, air-dashed to Pune so that the unit didn't have to waste a day.

Apparently, on the said day, Salman wasn't required on the sets since the team of Bodyguard were planning to shoot Kareena Kapoor's solo portions. However Bebo fell ill and the unit was left wondering what to do the whole day. That's when Salman being the professional that he is rushed in a private helicopter from Jaipur to Pune so that the crew didn't have to waste a day.

Narrates a source who was present on the sets, "The shooting had come to a halt since Kareena fell ill and Salman wasn't expected till much later. A lot of time would have been wasted and nearly 200 people would have been left hanging if it weren't for Salman's quick thinking. He air-dashed from Jaipur to Pune and even requested the pilot to halt at the Symbiosis Institute of Management so that time would be saved,"

Producer Atul Agnihotri too confirmed the story, "Salman bhai saved a day's shooting for us after Kareena fell ill and was advised two days of bed rest. We were canning a song that day and so I didn't have a supporting cast to fall back on. I requested Salman bhai to return early and he was back by the time we'd finished lunch. And we shot some solo portions with him."

Reliance BIG Pictures and Reel Life Production Pvt Ltd's Bodyguard directed by Siddique and starring Salman Khan and Kareena Kapoor is the official remake of the Malayalam hit of the same name. The film hits theatres this Eid, August 21st 2011.