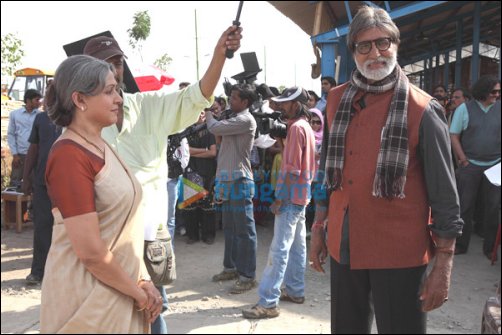 The ever-ethereal Hema Malini flew to Bhopal on Tuesday to do a 2-day cameo in Prakash Jha's Aarakshan. Everyone naturally presumed that it was on the Big B's insistence that Hema agreed to do the brief role.


Fact of the matter is, her Baghban co-star had nothing to do with Hema's casting in Aarakshan. Anyone who knows him knows he never interferes with the casting. It was the director who was very keen to have Hema over in Bhopal to play the small but significant part.


Apparently, when Prakash a huge Hema Malini fan offered her the role, she shot back in her blunt manner, "What is there for me to do in this film? True, I did a guest appearance in Laaga Chunari Mein Daag. But there I got a rare chance in a film to perform a classical dance. What's there in this for me?"


Eager for her to be part of Aarakshan, Prakash Jha whom considers Hema to be Hindi cinema's lucky mascot did some quick thinking. He decided to name the college where Aarakshan is located after Hema's character.


Hema is so kicked by the experience of shooting at a college named after her character that she asked the director to extend her role.


Laughs Prakash, "After we wrapped up her work Hemaji grumbled loudly, 'Is this all?' Can't I do more?'


The possibility of increasing her role is now being explored.


Says the besotted director, "Hemaji has brought luck to so many projects in the past. Her name spelt success at one time. If Aarakshan works my belief in her as the lucky mascot of the film industry would be strengthened."