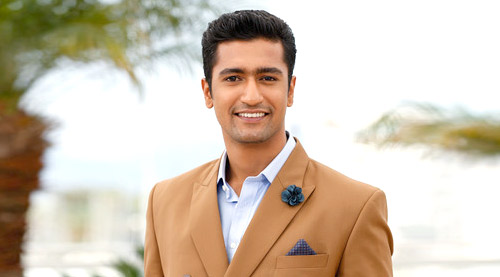 The Masaan actor Vicky Kaushal, who excelled as a bereaved lover, is on a roll. He has just signed on a love triangle with director Sameer
Sharma, where he shares screen space with the Dum Lagake Haisha
duo Ayushmann Khurrana and Bhumi Pednekar.

"It's very different from the usual love triangles, and that's all I
can say at the moment. I started my career with a cameo in Sameer
Sharma's Luv Shuv Tey Chicken Khurana. So, it's like coming home," says Vicky.


But before Sameer Sharma's love triangle, there is another film
ready. From playing a cremator from Varanasi in Masaan, Vicky has now moved to playing a musician from Punjab in debutant director
Mozez Singh's Zubaan.


Says Vicky, "The character in Zubaan was easier to do, since I am
Punjabi and I do have a fair knowledge of life in rural Punjab. That's
where my character comes from."


Vicky plays a character who is phobic towards music. "I can't explain
any more because it would give away the plot. But Zubaan was easier to do. I could relate better to the character. In Masaan, I had to start from scratch. Though I had worked in and

around Varanasi as an
assistant director to Gangs Of Wasseypur, I was not familiar with
Varanasi-proper. It was like a whole world opening up to me. I had to
learn everything from scratch about the culture language. Zubaan was much easier than Masaan."

About the similar-sound titles of his two films so far, Vicky says, "My
mother says after Masaan and Zubaan, my next film should be titled Kisaan."

Vicky Kaushal, who is the son of Bollywood's well-known action
coordinator Shyam Kaushal, was bathed in encomium for performance as
low-caste Varanasi boy trapped in a doomed love relationship in Masaan.


Says the disbelieving young actor, "To be honest, I never expected this
kind of acceptance. It was immensely motivating. I felt I was on the
right track. If I had chosen to be an actor, I had chosen well for
myself."

Vicky remembers how he got the Masaan role. "The director Neeraj
Ghaywan and I were both assistants on Gangs Of Wasseypur.We bonded since then and would discuss scenes from Masaan. During that time, Neeraj wanted to sign Rajkummar Rao for my part.

But his dates didn't work out. That's how I got the part."

Vicky never expected the reactions that got for his performance in
Masaan. "I knew I had worked hard. But this kind of praise was
unimaginable."


The young actor feels there is room for every kind of cinema and
actor. "I don't look at Zubaan and Masaan as non-mainstream or mainstream. They are cinema."