Like I always say, I have had the great privilege of being a witness to the rise of countless unknown men and women to the level of being legends and icons in my time. But if you ask me, the most unbelievable and unusual saga of a man I have watched taking every step, it is the man who makes you believe that anything can happen in life (kuch bhi ho sakta hai). I take great pleasure in telling and sometimes retelling the story of his success. This time I am tempted to narrate the story of Anupam Kher for an entirely new generation which has taken over the industry, but who have certainly not succeeded in taking away the shine and the glory of actors like Anupam Kher who is an actor for all seasons and all time.... 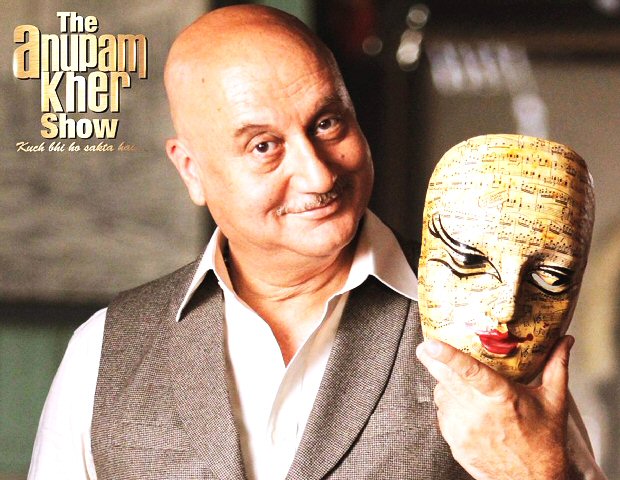 Anupam was born in a lower middle class family and his father used to earn ninety rupees a month in which the family of four had to survive, his parents, his brother, Rajiv and himself. Anupam went to a Hindi medium school and was a very average student who could not cross the thirty-eight percent marks that he got in the final year of school. He was not even good in sports and often tells the story of how his sports teacher who saw him taking part in a running race told him that he would come second even if he ran alone.

His father wanted him to take up a job as a "sarkari naukar" but Anupam was firm about the dream he had to be an actor. It was at around this time that Yash Chopra was shooting in Shimla for Daag with Rajesh Khanna, Sharmila Tagore and Raakhee. Anupam still remembers how he stood in a crowd scene in which he is still seen whenever the film is released. It was while watching this shooting that his ambitions to be an actor grew more firm.

It was while his father was looking out for a job for him that his very helpful friend, Vijay Sehgal showed him an ad of the theatre wing of the Punjab University looking for actors and even offering a stipend of rupees two hundred. Anupam was thrilled to see the ad, but from where would he get the money to travel to Chandigarh? He looked for all means and finally thought of the box his mother kept near the mini temple in their house in which she put in some money during every pooja she performed. Anupam was so desperate about going to Chandigarh that he stole hundred rupees from the box and took the first bus to Chandigarh. He was chosen and he soon realised that there was a ruckus at home about the hundred rupees missing. He at first refused to accept his "crime" but finally relented and was punished, but his father told his mother that their son was now going to earn two hundred rupees and he would gladly return her hundred rupees.

Anupam who was not good at all as an actor while in school turned out to be an outstanding actor with the guidance of theatre giants like Balwant Gargi and Ebrahim Alkazi and others. After making quite a name for himself he knew his destination was Bombay and landed in the city of dreams without any idea of what his future was going to be. The initial stages were literally scary. He first lived with a friend from the NSD days who was a landlord and who gave him a place to live in till he found his own house. His next house was as a paying guest with an "aunty" who had three children and a tiny room which she partitioned with a bed sheet to let five young strugglers like Anupam makes themselves comfortable in. The next destination was a hole of a room in a slum which was ironically called Kher nagar, a room which he again shared with three other strugglers and together they paid a monthly rent of rupees of thirteen only which they could not even pay sometimes. Anupam gave tuitions to the children in the slums charging each student a royal sum of rupees five which helped him in paying the local "chaiwala" and the "chilia" restaurant on which he and his friends depended on their breakfast before they left for their day-long struggle.  The rest of the day was "ram bharose". Anupam had two pairs of white khadi (cheap), white khurta and paijaama which he washed himself at night. He walked all the way to Juhu where Prithvi Theatre was and which was considered like a shelter house for strugglers who came in from all over India.

Anupam found it very difficult to convince filmmakers who were willing to listen to him that he was only twenty-six years old. He had gone bald when he was hardly twenty, but no one was willing to take him seriously and those who did offered him roles as a junior artist and one well-known filmmaker even gave him the advice to take up the roles which A. K. Angal who played father's and servant's roles. Anupam took his advice so seriously that he vowed that he would never enter the studio in which he had met that filmmaker and would never meet that filmmaker even if he had to go back to Shimla.

He grew friendly with Mahesh Bhatt who most strugglers of the time saw as a Messiah or a Mahatma of Indian Cinema. Bhatt was working on a film for the Rajshris. He kept promising Anupam that he would play the lead role in the film which he had called Saaransh. Anupam finally saw the light or that is what he thought. The Rajshris finally had their own say and wanted Sanjeev Kumar to play the role and Mahesh Bhatt even agreed. Anupam came to know about this dramatic change and packed his bags and went to building where Bhatt lived on the sixth floor. He was in a dangerously angry mood. He shouted out at Bhatt and called him a betrayer and a fraud who had made him rehearse for the role of a sixty-seven year old man for several months. He finally gave Bhatt what he calls "ek Brahman ka shraap" and went back to the waiting taxi. Bhatt was very impressed with the kind of anger he showed and immediately called the Rajshris and told them that he would make the film only if Anupam was cast in the role. When the film was released and it created the kind of excitement very few films did, Sanjeev Kumar met Anupam at a party and congratulated him and said he was the right choice and that he (Sanjeev) would not be able to create the same impact, a view that was even shared by the emperor of acting, Dilip Kumar.

Saaransh was the beginning of one of the most glorious careers of an actor in India. During the last thirty-five odd years Anupam Kher has worked in almost five hundred films and played every kind of role and has become a household name. After creating all kinds of records when it came to critical acclaim and the applause of the audience, Anupam, the actor is also doing films in Hollywood, the latest being a major film he is doing with one of his favourite actors, Robert De Niro. And he is being very quiet about a film he is now doing for which he has been shooting in Cape Town in South Africa.

With his growing popularity, Anupam also grew aggressively ambitious.  He started an entertainment company dealing with TV serials and major events. The attempt was a disaster and he had to fold up the company. He started another ambitious company to deal with the business of entertainment which was also a big failure. He was slowly learning his lessons from what he has also called his best teacher -failure.

Anupam now successfully runs his own acting school called Actor Prepares with around a thousand students and the best known student who has walked out of the school and become an international star is Deepika Padukone.

Anupam has never kept out any of his talent. He has now written a unique book called ‘The Best Thing About You Is You’ which is generally lessons he has learned from his own failures. He was recently conferred with the Padmabhushan for which he received both praise and criticism. Those who were against his receiving the honor said he had got it because of his "chamchagiri" as they crudely called it with the Prime Minister, but Anupam flashed all his achievements in their faces to silence them. When asked if he would get into active politics at this stage, he answered with his trademark sentence kuch bhi ho sakta hai.

And when asked about his future as an actor, he said in his never say die spirit, "I have not even reached the interval and there is a very long way to go, a journey during which I believe kuch bhi ho sakta hai, itna kuch hua hai, abhi bahot kuch karna baaki hai".