Just a day ago, we saw that Karisma Kapoor was partying with Kareena Kapoor Khan and Saif Ali Khan in England where the couple is for a work cum pleasure trip. While the couple did take a short tour across Europe with their son Taimur Ali Khan, later, Kareena’s family including Karisma Kapoor joined them during their trip. As of now, Saif is busy shooting for Jawaani Jaaneman as he tries to shuttle between work and family commitments in the Queen’s city whereas Kareena is taking time out to spend with her family before she dives into the shoot of Angrezi Medium. After partying during the weekend, the Kapoor sisters were now seen spending quality time with their mother Babita. 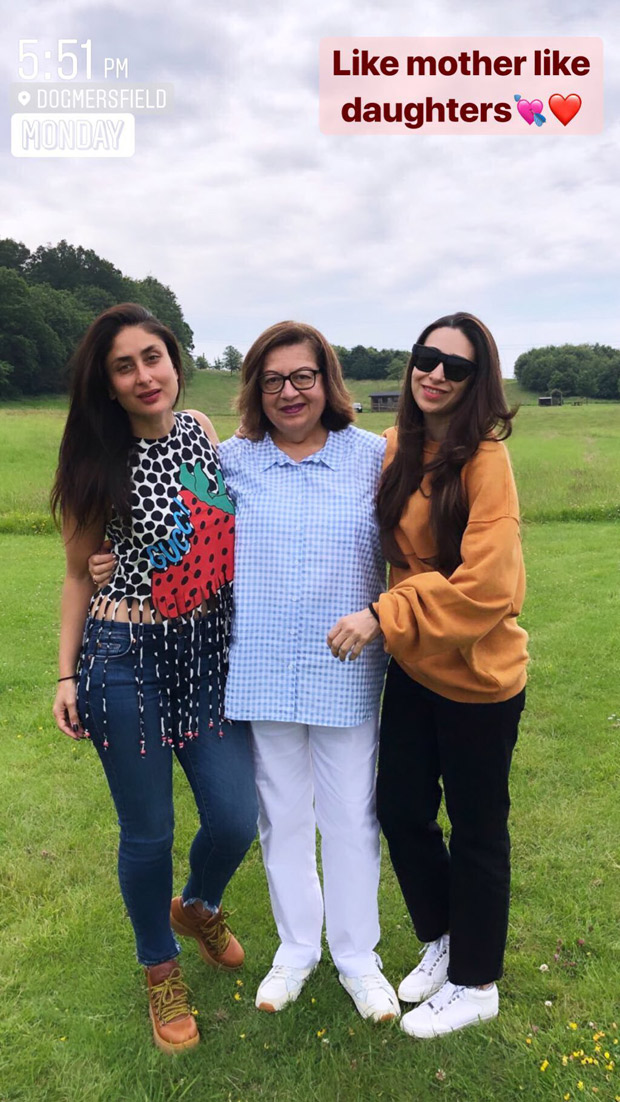 Readers would be aware that Taimur Ali Khan and Kareena Kapoor Khan were seen enjoying the cricket match last weekend along with Karisma Kapoor and Babita. And now the daughters decided to spend some ‘chill’ time with their mother. Karisma not only posted a photograph with her mother and sister saying, “Like mother like daughters” but also shared another photo with her sister Bebo too. Here, have a look:

On the work front, Karisma Kapoor will make her digital debut with Mentalhood in which she plays the role of a mother of two. Her sister Kareena Kapoor Khan is swamped with projects which include some big films like Good News, Takht, Angrezi Medium and Lal Singh Chaddha. She also made her debut on television as the judge of the reality show Dance India Dance.