“Playing dress-up begins at age five and never truly ends." – Sonam Kapoor Ahuja lives up to this adage to the hilt. Unarguably, Sonam Kapoor is the resident fashionista of Bollywood who stirred up a storm and spruced up the fashion scene. There is a plausible reason why her undeniably sophisticated fashion game is always a notch above her contemporaries. Her partner in crime in this glorious journey has been her sister Rhea Kapoor whose sharp gaze for making a poignant point with fashion finds a befitting muse in Sonam. Sonam goes on to imbibe the varied vibes of exoticism, sartorial and distinct style plays as the occasion demands. Sonam’s forte lies in bringing to the fore, some of the most sought-after luxurious brands in exciting colours, interesting silhouettes and dazzling cuts. Born on June 09, 1985, the eldest daughter of Anil Kapoor, Sonam schools us on all things modish as well as classics with her out-of-the-box and high-fashion sightings. Ringing a dramatic fervour in all her #OOTDs and #OOTNs, Sonam Kapoor raises the stakes with a beauty game to boot, courtesy of her go-to makeup maverick, Namrata Soni. 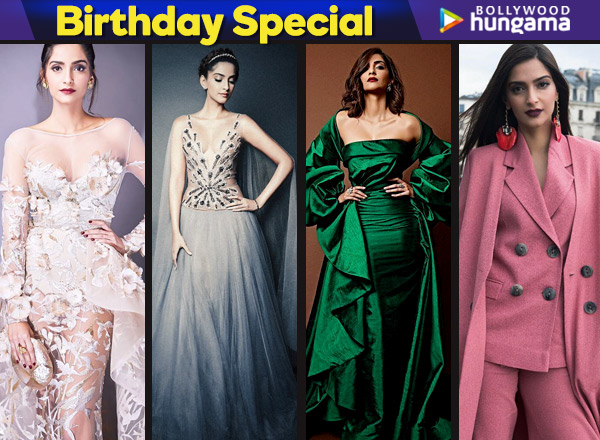 The newly married Sonam Kapoor Ahuja silenced and garnered the appreciation from critics and audiences alike with her stellar performance in the biopic Neerja in 2016. Subsequently, her stints in Pad Man and Veere Di Wedding have only reaffirmed the faith in her engaging screen presence. Pushing the boundaries of fashion with her impeccable style, Sonam Kapoor’s spectacular offerings have attained a sartorial perfection every time she has stepped out. As she turns 33 this year, we revisit Sonam Kapoor’s glorious than ever style shenanigans that have only refined and exemplary over the years. 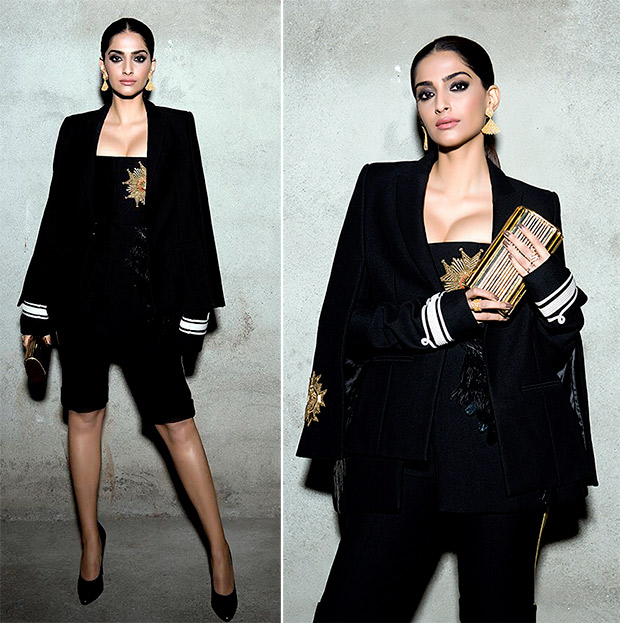 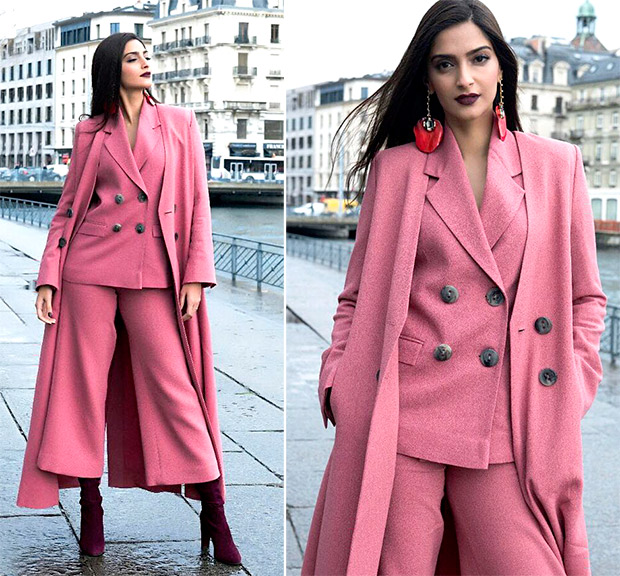 Reaffirming our beliefs that as long as there is pink in this world, the world will be a better place! The stereotypical colour, pink got a sophisticated update as Sonam Kapoor conveyed a dramatic and poignant point in Geneva. Sonam cut a bright picture in a stark pink suit from the Fall Winter 2017 collection of Bougessa and layered it up with a four slits long blazer. A pair of burgundy high boots from Stuart Weitzman teamed well with statement red earrings from Marni, a subtle makeup of berry tinted lips, blushed cheeks, delicately lined eyes and blow-dried hair. 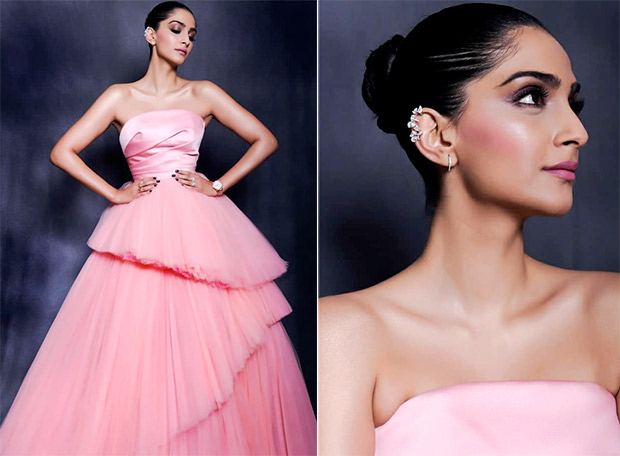 Looking at the pink side of life, Sonam donned a strapless gown from Viktor&Rolf featuring a satin bodice and tulle tiered voluminous skirt, Sonam Kapoor sported an IWC Schaffhausen watch with studded ear cuffs, courtesy Repossi. A stunning makeup of blushed cheeks, highlighted cheekbones, pink lips, dark eyes and a chic hairdo paired well with dark well-manicured nails. A versatile colour, pink is certainly not just a colour but reflects a strong sense of self, coupled with oodles of sensuality and feminine chic. 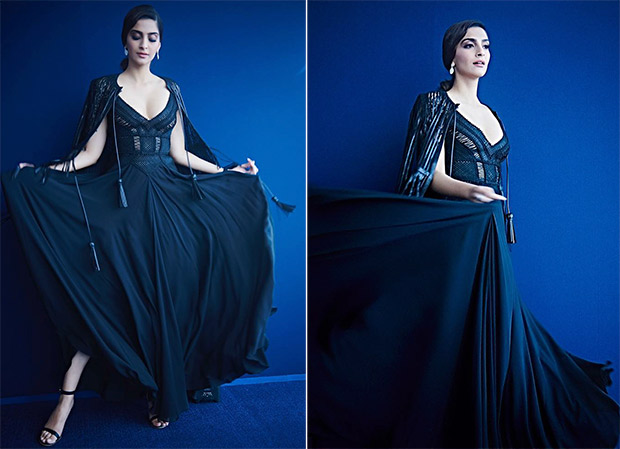 Sonam spelt black magic as she flaunted a black Elie Saab creation replete with a fringed jacket and meshwork. She teamed it with intense eyes, nude pink lips, drop earrings and a side-parted low back hairdo. The voluminous silhouette and the crisp bodice complimented Sonam’s lithe frame to the T. 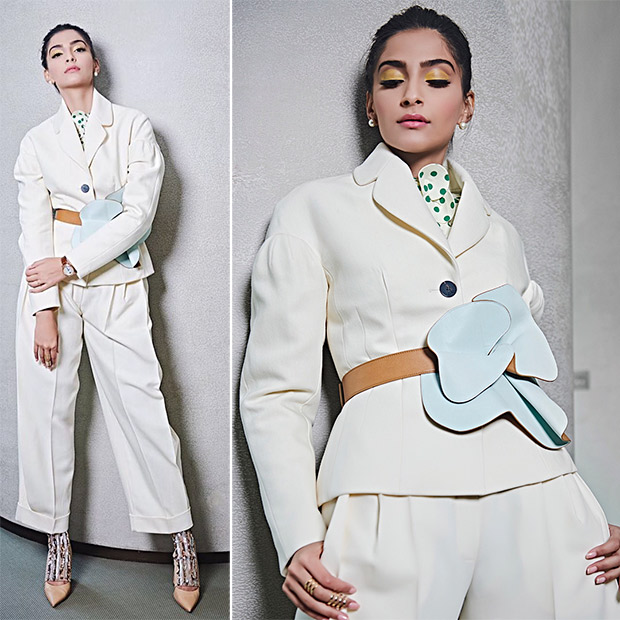 Sonam donned an ivory coloured suit from Delpozo from their Fall Winter 2018 collection featuring a green polka dot underlay and a dramatic bow silhouette at the waist. A quirky multi-hued sock shoe was a worthy addition. A stunning makeup of lemon yellow eyelids, pink glossy lips, large lashes, defined eyebrows and blushed cheeks and a top bun topped off her sleek look. Picking out an outfit that’s tailored for a more sophisticated finish, the details that earn it an A+ are the large bow and the sock shoes. We loved how Sonam chose to indulge in some fun with makeup in an otherwise sleek suit. 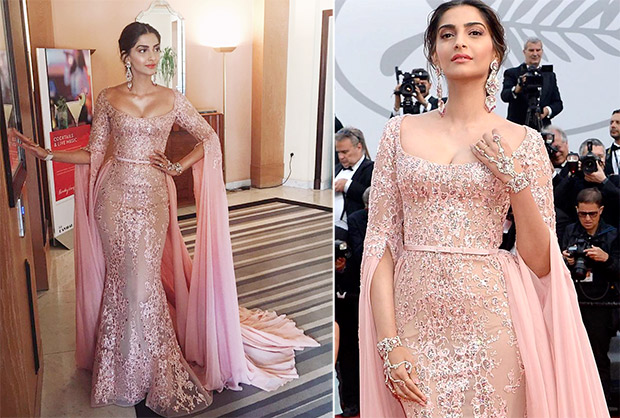 As the face of the cosmetic giant, L’Oreal at the prestigious Cannes International Film Festival 2017, Sonam Kapoor proved that there’s no such thing as too much bling as she brought with her, an avalanche of classy bling through a peachy-pink Elie Saab couture gown replete with dramatic sleeves and a delicate belt. She rounded out the look with customized jewellery from Kalyan Jewellers, a wispy updo, pale pink lips and delicately lined eyes. 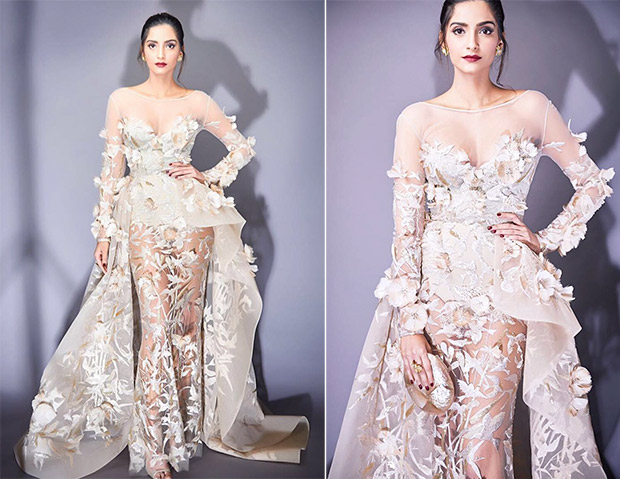 The Filmfare Awards 2017 saw Sonam flaunt a dreamy and elaborate Eli Saab gown from the Fall 2016 Haute Couture collection which was a couture dream – an off-white, sheer, bird-embellished one with an asymmetrical hem and solid lined bodice. Sonam wore a pair of earrings and a statement ring from Aurelle, a pair of nude peep-toes and a gold clutch that blended well. A non-fussy updo accentuated by a few deliberate stray strands on sides, bold eyes and dark lips rounded out the look. 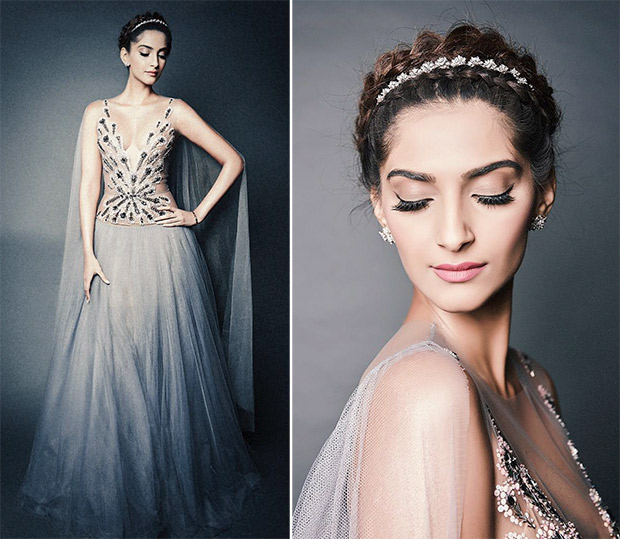 The Stardust Awards 2016 saw Sonam wear a tulle gown with a sheer embroidered bustier and a bold, sultry plunge by the Moscow-based Yanina Couture from the Fall 2016 Collection with the back featuring a cascading sheer cape and zipper detailing. A diamond headband and studs from Minawala jewellers. A beautiful braided updo and subtle makeup accentuated by a winged eyeliner, shimmery lids and bright pink lips perfected her red carpet look. 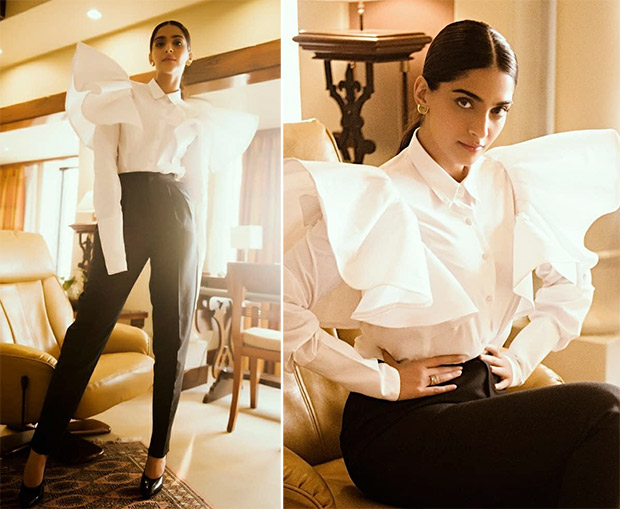 Taking on the trusty monochrome, Sonam teamed a white shirt from Kojak Studio with fitted cropped pants from YSL and stepped into black Gucci pumps. A chic low back ponytail with minimal makeup rounded out her look. With a hint of drama and oodles of subtlety, Sonam certainly had us enamoured with this #OOTD. 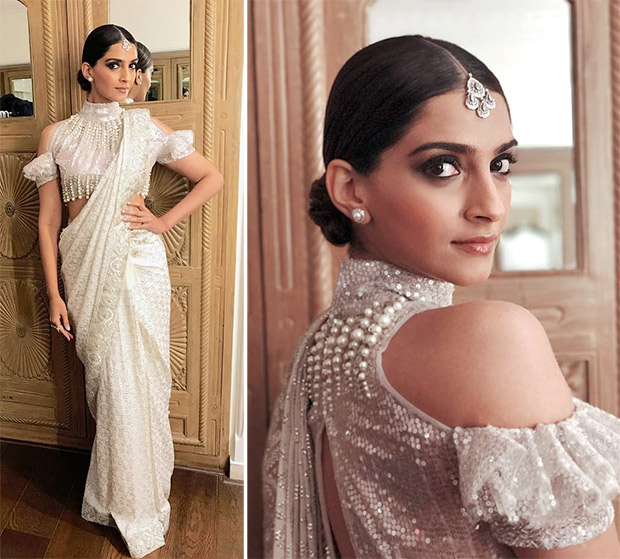 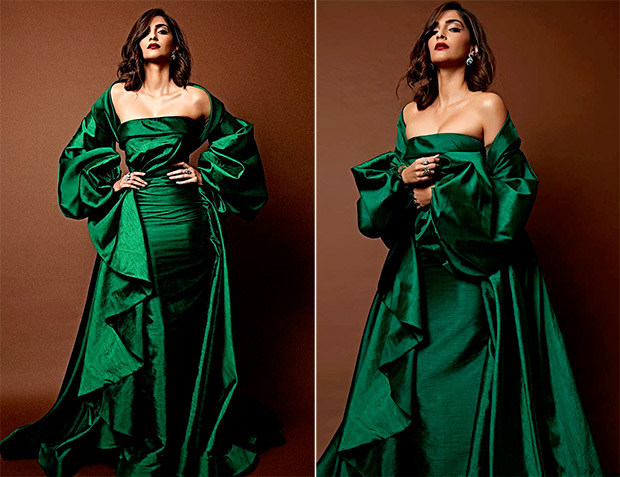 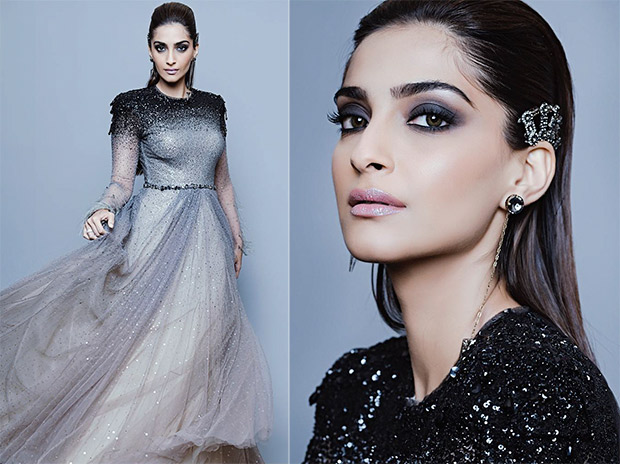 While Sonam and Couture are synonymous, we believe these three virtues aptly describe Sonam’s towering fashion game-uber-luxe, high-octane and extraordinaire. Right from donning power suits to an opulent gown or an ethnic creation, Sonam is always such a delight! Here’s wishing Sonam an amazing birthday with always sartorial moments!