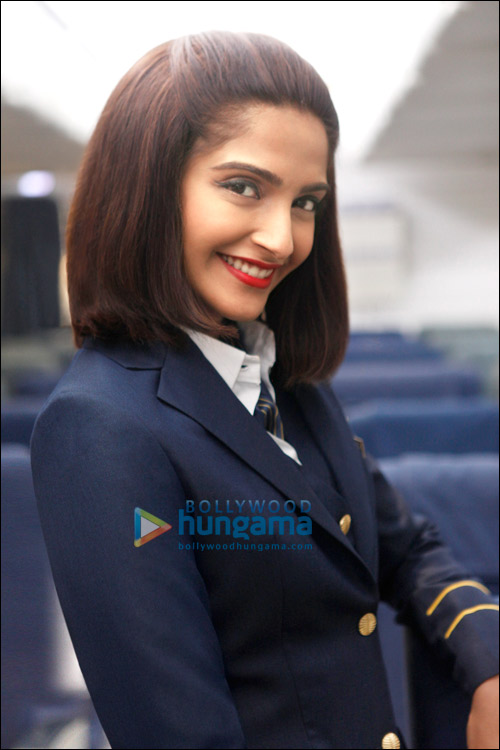 Here it is! The much anticipated first look of Sonam Kapoor in the Ram Madhvani directed bio-pic Neerja. Sonam plays the role of Neerja Bhanot, the daredevil flight attendant of PanAm, who lost her life trying to save the lives of passengers from terrorists on board who hijacked PanAm Flight 73 on September 5, 1986. Neerja posthumously became the youngest recipient of India's highest civilian award for bravery, The Ashok Chakra. She was only 22 when she passed away.

Talking about her role in the film Sonam Kapoor says, "There are times in an actor's career when a very special role in a special motion picture comes your way. The biopic of Neerja Bhanot is one such. I feel honoured and humbled to have the opportunity to essay the role of India's youngest Ashoka Chakra awardee."

"Making Neerja is an emotional journey for all of us. I couldn't have asked for a better team than Fox Star, Bling Unplugged and Equinox. And Sonam is Neerja", adds director Ram Madhvani.

Vijay Singh, CEO, Fox Star Studios, says, "Neerja's story is one of courage, hope and incredible self-sacrifice. Fox Star Studios is proud to be bringing her story to life. No one but Sonam could have essayed her character and a visionary director like Ram Madhvani will certainly make a film that will touch the hearts of everyone."

Atul Kasbekar, producer, adds, "When we asked people if they'd heard of Neerja Bhanot, most hadn't. For us then, at Bling Unplugged, a story of courage as exceptional as Neerja's simply deserved to be told. We just decided that we would our bit to ensure that India would remember one of its great heroines."

Produced by Fox Star Studios and Bling Unplugged, the story and screenplay of Neerja has been written by Saiwyn Quadras. Sanyukta Chawla Shaikh has written the dialogues. Shabani Azmi plays a very crucial role in the film alongside Sonam. Currently the makers are shooting for the film, in Mumbai where a set of a Boeing 747 has been recreated.

Sonam Kapoor is all about power-dressing as…