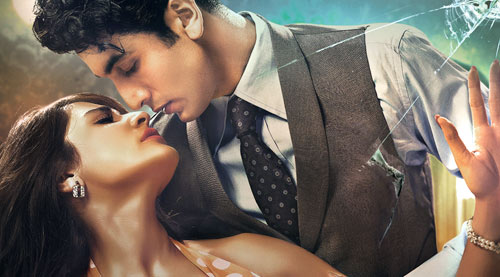 Team Bombay Velvet came together today in full force at a resort in Goa where they showed a seven minute clip to senior journalists from all across India. The seven minute clip gives you a nostalgic sneak peek into the Bombay of 1950s and 60s. The colour tone, the cars, the roads, the clothes... you get transported to the past in an authentic manner. Ranbir Kapoor displays a maniacal energy to succeed against all odds in his professional and personal life. There's also an intense child like vulnerability that's endearing. Anushka Sharma not only looks beautiful, she also displays the warts borne during her early days in Bombay when she 'compromised' in a way to move ahead. The seven minute clip will be played on all the Star Network channels on May 10.

Karan Johar in a white double breasted suit was the cynosure of all photographers. He was in his element as always. He said that inviting media from all across India to a plush resort in Goa is a damn good idea that other producers, including him will follow. "You are bribing them and not even paying money," Karan said amidst claps and laughter. The entire star cast and rest of the team will be doing interviews tomorrow. Ranbir said that he and Anushka are open to all sorts of questions on the film and about themselves including Vikas Bahl's sex life. Anushka jokingly corrected Ranbir saying that, "Yes you guys can ask questions but not about everything."