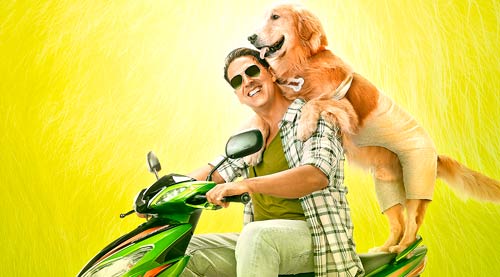 Akshay Kumar is not known to fraternize with his co-stars beyond the sets and locations. As one of his most favourite co-stars Katrina Kaif once said to me, "He is a lot like me. We are both very friendly on the sets. But after pack-up we like to head straight home."


That's no longer true. Akshay Kumar has found a new buddy on the sets whom he just can't do without meeting even after shooting is over.


Akshay's new buddy is an adorable canine, his co-star in his next film Entertainment.


Speaking fondly of his furry friend, Akshay Kumar says, "His name in the film is Entertainment and he and I will be buddies for life."


The two bonded while shooting for their film together.


Says Akshay, "I made sure he didn't just feel like a dog being made to do tricks for treats. I would spend a lot of time off- camera playing with him. As soon as he accepted we were pals and not just co-stars, he'd let me sleep on his belly at break times, which was the most blissful feeling in the world."


The two buddies also got sporty on the sets. "He loved it when I played ball with him, as his attention toy was a tennis ball, which I carried everywhere with me. He's a beautiful Dog."


Akshay Kumar recommends a canine in presence in every household. "From the bottom of my heart I feel every gentle kid should have a dog. There is no companionship quite like it."


Even before befriending his canine co-star Akshay was a dogs person. "My homes are full of dogs, and that's been the case for years! I have two German Shepherds named Oaky & Clio in my Mumbai home, and a Golden Labrador who looks after my little Portuguese Villa in Goa. Even at my Mum's, who lives just above my house, we have a li'l funny crossed-eyed Beagle that is my niece's pet. She adores him to bits!!"


To Akshay Kumar, canines are the most dependable creatures. "For me dogs are where the heart is, at home, looking after your family while you can't."