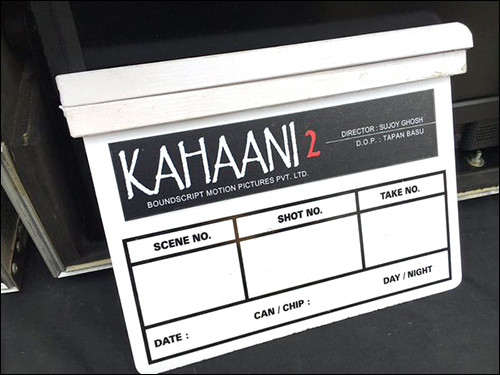 At the start of 2016, the rumours about a sequel to the popular thriller Kahaani was put to rest when Sujoy Ghosh announced about the second installment. While it was just an assurance, the director has now finished the scripting of Kahaani 2 and the film has already gone on floors with the leading lady.

Reprising the role of the protagonist is Vidya Balan, who in the first installment, was seen as a pregnant woman. However, just like the previous one, the plot of the film is strictly kept under wraps and so, is the role of Vidya Balan. Sujoy Ghosh not revealing too many details took to Twitter to post the picture of the clapperboard of Kahaani 2 along with seeking the blessings of everyone saying, "in gratitude for the love you gave our first film. we will work even harder to live up to your expectations:)"

Produced by Jayantilal Gada of Pen International, Kahaani 2 is said to be a different story compared to its first installment. However, the logistics and other details haven't been revealed by makers.