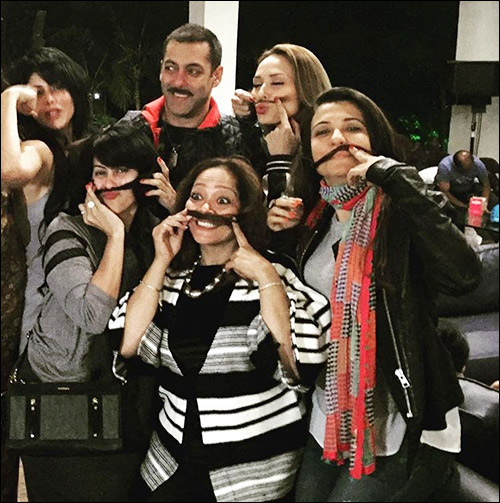 Salman Khan's 50th birthday bash is currently the talk of the town considering the who's who of Bollywood was present at the Panvel farmhouse of the superstar to bring in his special day. However, it seems that the party mood continued even a few days later and Salman Khan's recent picture with the lovely ladies of the evening went viral, courtesy, Mini Mathur.

Popular anchor Mini Mathur, who is also the wife of Salman's bestie Kabir Khan, posted a picture on the image sharing network saying, "Helping Bhaijaan moustache up for #sultan". The picture had the superstar surrounded with ladies, which included Mathur, Sajid Nadiadwala's wife Warda, R Madhavan's wife Sarita and Salman's alleged girlfriend and model Lulia Vantur. While the women gave quirky expressions whilst holding on to their fake moustaches, Salman Khan who sported a moustache after a long time is now being seen in this avatar for his upcoming film Sultan.

Sultan produced by Yash Raj Films, is directed by Ali Abbas Zafar and has Salman Khan playing the role of a wrestler.