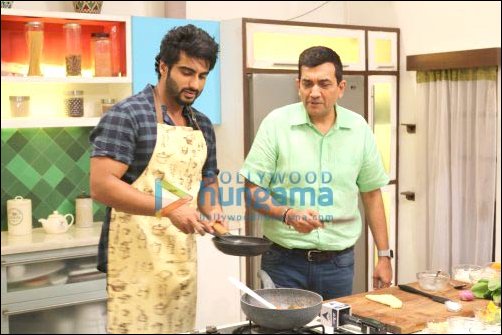 A ruggedly handsome macho hero and a renowned chef, this unique combination came together recently and actor Arjun Kapoor just has one thing to thank for - his upcoming film Ki and Ka. During the promotions of this film, Arjun got a chance to meet Sanjeev Kapoor.


Being a die-hard fan of the chef for the longest time, food lover Arjun Kapoor also shot a special episode with Sanjeev Kapoor. Though initially the actor wasn't really inclined into cooking, his upcoming role as a house-husband has him making varied dishes for his career-ambitious wife in the film. Sources reveal that the actor who took cooking lessons, as part of his preparations for the film, cooked a special dish on the show called 'KiKa Chicken'.

Along with that, Arjun Kapoor even managed to convince Sanjeev Kapoor to dance to the popular party number 'High Heels' from the film.


Also starring Kareena Kapoor Khan as his leading lady, Ki and Ka is directed by R. Balki and is produced under the banner Hope Productions and Eros International. The film is slated to release on April 1.