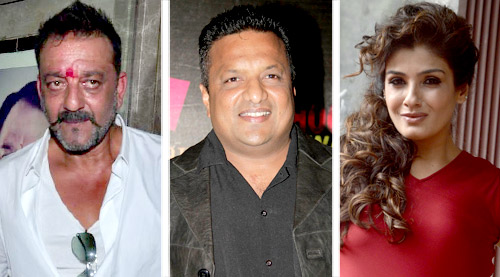 Sanjay Gupta: "His 23-year ordeal has finally ended. His family can finally live in peace. Professionally, he will rise again, as he always has."


Paresh Rawal: "I am extremely happy and relieved as his journey to hell and back, is finally over."


Pritish Nandy: "I am delighted. Sanjay is a dear friend and I know how deeply distressed he was when people called him a terrorist. But luckily all that is behind him now. The courts have

cleared him. The sentence he served was for possessing an illegal weapon. Not for anything to do with the bomb blasts. He is a free man now and can go back to what he loves doing. Acting."


Raveen Tandon: "Sanju has and will always be my most favourite co-star. As a person, he's wonderful. I remember when we were shooting together, the entire unit, from the director to the spot

boy, would have a blast all thanks to Sanju and his humour. It was when we were shooting in Mauritius that Sanju got arrested for the first time upon his return to the city. I remember him being

very lost and in deep thought. While everyone was having fun on the beach, he was evidently worried, sitting at the far end looking into the sea. But the law has to take its course and one can't

question it. But the fact remains that Sanju never condemned the law, its decision or the police. He served his sentence, stayed a good inmate. I'm so happy for him and I wish the best for him.

Now, I can't wait to see another Munna Bhai!"


Rati Agnihotri: "May God bless Sanju's entire family. Sanju, I am truly happy for you. Now please act in some good films.You owe that to your fans."


Subhash Ghai: "He is going to play his second innings bigger than the first. Coz he is wiser now."


Sanjay Gadhvi: "I am really glad that he is back! It was during the shoot of Kidnap that the judgement had been passed! I would see the stress every day that we shot. On the positive side,

he also got married during my shoot...we were shooting in Goa. He has 'done his time'.... served the time as directed by the judiciary system. I welcome him back, congratulate him on his freedom,

and laud him for his undying spirit! I am sure he wants to put all this behind him, and move on. Let us all help him do that!"