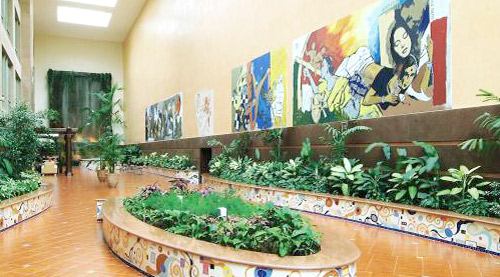 I was sitting at one of the last Irani hotels left in Mumbai at Worli. I was not aware that I was in the distinguished presence of the painter M. F. Husain who I used to follow when he used to walk at Flora Fountain (Sorry, now Hutatma Chowk) dressed all in white and walking bare feet in the heat of the Sun. He always preferred to have his tea either made by himself, some friends who he had taught how to make his brand of tea or some small time hotels where they used to give him special permission to go into their kitchen and make his tea himself.


We were sitting on chairs which have now gone out of fashion with the Irani hotels, their tea, their cakes and their pudding. He was sitting with his legs on the chair and while he was having a sip of his tea he said in almost a whisper, "Ali, suna hai, Yash Chopra Ke naye studio mein ek puri diwar khali hai, mein uss par kuch karna chahta hu." He said he wanted to paint his version of the hundred of Indian cinema. He knew I was close to Yash Chopra and asked me to talk to him and ask him if he liked the idea. I in my excitement said, "Yashji to pagal Ho jayenge, aapko shaayad pata nahi woh appke kitne bade fan hai." We had two more cups of tea and left.


The next morning I tried to reach Yash Chopra as early as possible because I knew how thrilled he would be with the Husain idea. I met him, we had tea (for years almost everyone in the industry knew my weakness for tea). I then told him about Husain's plan and Yashji stood up in his place and said, "Pagal ho gaye ho kya, Ali, woh itna mahaan kalakar hai, woh mere liye kuch kyon karenge?" I told him he was dying to do what he had planned. Yashji asked me for his number and talked to him and said, "Husain saab yeh Ali hamesha pagalpan ki baat karta hai, yeh aaj bhi kuch aisa hi baat kar raha hai, meine jo isse suna hai, kya sach hai?" There was no further talk and the three of us met in Yash Chopra's office the next morning. Husain told Yashji that he wanted to paint the wall of his studio with his painting of his vision of the centenary of Indian Cinema. Yashji said, "Yeh Meri taqdeer ki baat hai. Isse badhiya kya ho sakta hai mere studio mein?" Husain convinced him that he would paint the wall all by himself, he would get the best quality of paints and whatever material was required from the places he used to get things for himself. He also made it clear that he would not charge a single naya paisa for his effort and that Yashji would only have to pay for the labourers. He had one more request. He said it would take him at least two months to paint the sixty feet high wall and he would be happy if a small tent would built for him to keep his privacy. Yashji agreed to all his terms even before he could complete making them.


The day to start work on the tent started and when it was completed Yashji invited Husain to have a look at it. Husain drove down from Colaba and had one look at the tent and said, "Yeh kya bakwaas hai, meine to ek siddha saddha tamboo manga tha, aap ne toh five star hotel ka suite bana diya. Mein yaaha se kaam nahi karoonga." He stayed on till the tent was demolished and said he would manage on his own and start painting the wall as soon as all his material arrived from different places of the world.


A week later Husain called me and told me to tell Yashji that he would be starting work at three-thirty that same day. Yashji who used to stammer, stammered all the more and mockingly fired me saying, "Yeh kaise muskil mein phasa diya tune mujhe?" He ordered the entire art department to be on the alert. Husain arrived with his sons and two daughters who were all over sixty. Yashji was with his wife Pam and his then daughter-in-law Payal. Husain got into his working clothes and asked for the tallest wooden ladder. Everyone around was all eyes on Husain as he started taking the first steps on that wooden ladder. I had never seen Yashji so worried. He came to me and asked me if Husain who was eighty-seven years old at that time would climb all the steps and I shouted out to Husain, "Aapko koi madad ki zaroorat hai kya?" He behaved as if he had not heard me and continued climbing one step after the other while Yashji said he would die if God forbid something went wrong with Husain and so was his family. He reached the top in less than ten minutes and painted a picture of Lord Ganesh which was his way of saying that his work had begun. He came down the steps like a boy of seventeen would be scared to do. Both the families heaved massive sighs of relief while he only smiled and asked his elder daughter to get him his own tea which she had not forgotten to bring with her in a flask.


I visited Yash Raj every day on his orders and I even skipped work to be with him because I knew that I would never find an opportunity to see miracles happening before my eyes. Yashji came down very rarely and his favourite sentence used to be, "Yeh chamatkar kab pura hoga?" and went back to his fourth floor office.


In eight days Husain Saab had painted the entire sixty feet wall with images of actors, actresses and renowned filmmakers of all ages in his own inimitable style. On the tenth day he said his mission was over. The history of Indian cinema had come alive on the wall of Yash Raj studio.


That was perhaps one of the last major pieces of work Husain had done in Mumbai. He did many other things but what he did on the wall of Yash Raj Studio is history which will now live as long as history lives. I don't know if the new generation of people who walk in and out of Yash Raj studios know what a treasure lies on the wall and I sometimes feel very sad that both Husain and Yashji are not alive to see the magic they worked together and I will always be proud that I was a small part of that miracle.