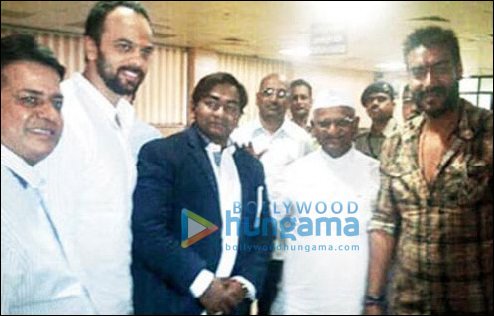 Ajay Devgn was to be felicitated by Anna Hazare at an event organized by the Pune Police, but it was cancelled last minute due to security reasons. However, Ajay made sure that he at least met the social activist before he leaves for Delhi. He caught up with Anna at the airport on the latter's way back.

The Pune police wanted to felicitate Ajay Devgn for his role of an honest Marathi cop in Singham and who better than social activist Anna Hazare, who has been fighting corruption, to felicitate Ajay. Anna flew down to Pune especially for the event. But while the organizers were expecting around three thousand people, over ten thousand turned up. Very soon, the event became extremely chaotic and entering the venue became impossible.


Ajay, who was traveling with his director - friend Rohit Shetty and his business manager Kumar Mangat, left without even entering the venue and so did Anna Hazare. Ajay really wanted to meet Anna and was upset that he didn't get the chance to. When Ajay learnt that Anna was heading towards the airport, Ajay rushed there and met up with the activist.


Ajay was extremely happy to have finally met him. He tweeted, "Wnt ysterday2 pune and met Anna hazare. What a man! Un4tunately met him at d airport instd of d event becoz d crowds took over d stadium!!!"

Ajay Devgn shares a glimpse of the fanart,…