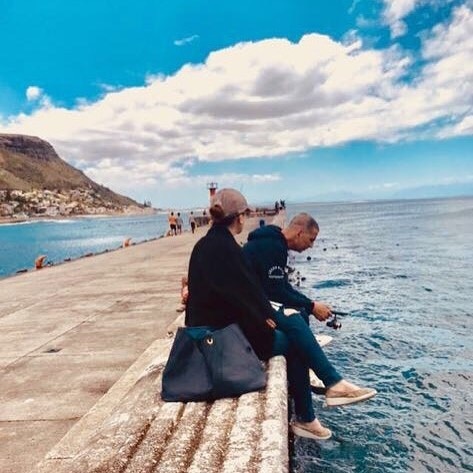 Akshay Kumar has been very busy with his work schedule. The actor gave two successful films this year and has already finished working on another two films. After a hectic year, the actor has gone on a well-deserved vacation with his family to South Africa.

Last weekend, Akshay Kumar and Twinkle Khanna took off to Cape Town to begin their Christmas and New Year celebrations together with their kids Aarav and Nitara. He had shared a picture of his daughter Nitara with his house help's son Valentino.

On Tuesday, Akshay shared a beautiful photograph of himself with wife Twinkle as he enjoyed the picturesque beauty of Cape Town. Sitting nearby a sea, they were enjoying some downtime together. Sharing the picture, he captioned it, "Deep blue sea and skies to match, long conversations and fishing for a catch :)"

On the work front, Akshay Kumar is gearing up for Pad Man which is scheduled to release on January 26, 2018. The film also stars Sonam Kapoor and Radhika Apte. Besides this, he has also wrapped Gold, which is set for August 15, 2018, release.