The entire cast of Brahmastra came together in Varanasi for a media meet recently where they decided to give us a glimpse of the film. While Ranbir Kapoor and Alia Bhatt were recently seen shooting for the film there, joining them was Nagarjuna and Mouni Roy. The Gold actress is expected to be playing the antagonist and the South superstar is supposed to be doing a ‘special role’ details of which have been kept under wraps. Photos of the same have started doing the rounds on social media. 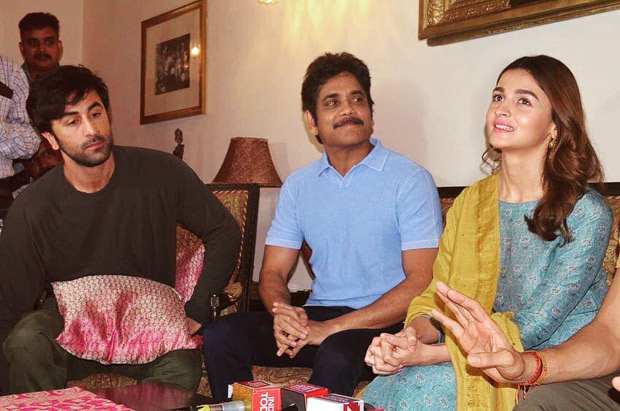 BRAHMASTRA: Nagarjuna and Mouni Roy join Ranbir Kapoor and Alia Bhatt in Varanasi and the photos have taken the internet by storm!

Brahmastra is currently being shot in Varanasi and the cast along with their director Ayan Mukerji decided to speak to the press regarding the film. In the same, Ranbir Kapoor was seen talking about his best friend and filmmaker Ayan Mukerji where he called him a slave-driving director and that he tortures everyone to the core. While Alia informed everyone that he is being sarcastic, Ranbir continued that his relationship with Ayan has been tough on the sets of the film.

Besides him, Alia Bhatt spoke about the varied delicacies that she would like to try out in Varanasi, from chat to lassi and the actress expressed her excitement regarding the same.

Here’s a glimpse of the photos from the press conference that has been doing the rounds on social media:

While Nagarjuna and Mouni Roy have joined them, amongst the primary cast, Amitabh Bachchan seems to have missed out on it. Produced by Dharma Productions, Brahmastra is expected to release during summer 2020.

Also Read: Ranbir Kapoor fan clarifies over trolls claiming that the Brahmastra actor treated him disrespectfully! Here’s what he had to say!