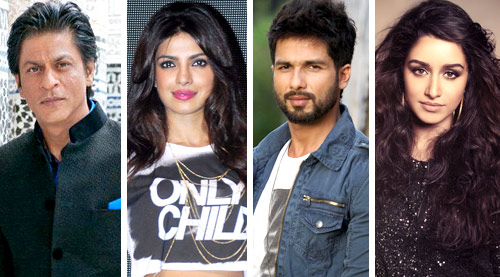 As the flood waters rise to startling levels in the stricken state of Kashmir, people across the globe are sending out their prayers wishing well for the stranded victims. Bollywood too isn't far behind. Voicing out their concerns, various celebrities have taken to twitter talking about the flood and praying for the affected.

Shah Rukh Khan: "Hope and Pray the flood situation in Kashmir gets controlled sooner than soon."

Priyanka Chopra: "Why does Kashmir always have to suffer so much.. My heart goes out.. Prayers..."

Arjun Kapoor: "I salute the bravery of our armed forces and I pray for everyone in Jammu Kashmir...life is soo bloody cruel sometimes..."

Shahid Kapoor: "Prayers for all those stuck in Kashmir floods and respect to the army for all they are doing ."

Sulaiman Merchant: "Prayers going out to the people stuck in Kashmir and Srinagar. "Himmate atta karo"

Kunal Kapoor: "In association with an NGO, I have started a fundraiser to help raise money for the terrible situation in Kashmir!"

Neha Dhupia: "Phenomenal to see the #armedforces working collectively to rescue everyone whose stranded in #Kashmir! Prayers for everyone out there. Also a special mention to the news channels reporting live and helping in connecting loved ones ! #KashmirFloods"

Riteish Deshmukh: "Its heartbreaking to see what's happening in Kashmir - praying 4 those who are stranded. Respect 4 d army/rescue teams working round d clock"

Madhur Bhandarkar: "A whole-hearted Salaam to the Indian Army for its flood rescue operation in Kashmir.We r safe & secure only because of u. #RESPECT. @adgpi"

Vidyut Jammwal: "For truly being paradise on earth, the pain #Kashmir & the people go through is just gut wrenching! Prayers go out to all..."

Manoj Bajpayee: "praying for the safety of all affected by the flood in Kashmir."

Boman Irani: "Praying for abatement of floods in Kashmir. Courage to the rescuers and patience and faith to an anguished people."

Anupam Kher: "Horrifying visuals of floods in Jammu & Kashmir. My prayers for everyone's safety and well being."

Huma Qureshi: "Half my family in Srinagar .. Many stuck on 1st floor of their own houses.. Efforts underway to move them to safer areas underway..Praying.."

Farhan Akhtar: "Thoughts are with all the families affected by the floods in Kashmir and wishing the rescue teams all the best in their efforts. #weR1"

Vivek Agnihotri: "A common man can't do much at this time but often prayers help. Let's pray for our Kashmiri brothers. #FloodsInJammuKashmir"