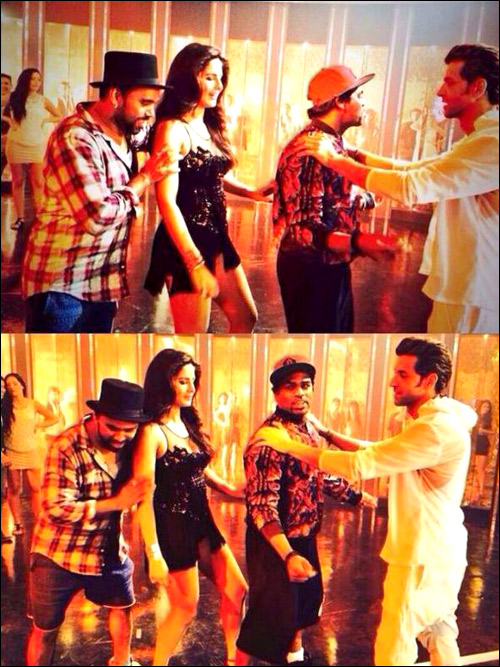 Fondly termed as Greek God by his female fans, Hrithik Roshan will be soon be back in his rugged avatar in Bang Bang. Accompanying him and adding on to the sizzling chemistry will be the sexy Katrina Kaif. While this potent combo packed with high octane action is eagerly awaited, the makers of Bang Bang want to leave no stone unturned for the promotions.

Katrina Kaif and Hrithik Roshan were recently spotted during a shoot schedule as they were getting prepped up for a promotional song video for the film. Katrina was seen wearing a short black dress and Hrithik on the other hand was seen in an all white avatar. The two were attempting to get their steps right for the song and lending a helping hand to them were the choreographer duo Bosco-Caesar.

The shoot for this promotional video which is also the title track of the film was supposedly postponed owing to Katrina Kaif's ill health. However, the actress soon recovered and she resumed shoot with co-star Hrithik Roshan immediately after it.

Considering Hrithik Roshan's impeccable dance skills, we also hear that the actor will be doing some trademark Michael Jackson moves in this song. Though filmmaker Siddharth Anand denied about it being a tribute to the pop star, the director maintained that the dance will surely remind everyone of the famous MJ. However, he also added that they will not be doing the patent moonwalk in the video.

As of now two songs of the film 'Meherban' and 'Tu Meri' have been released. Bang Bang is the official remake of the Tom Cruise, Cameron Diaz starrer Knight and Day. Produced by Fox Star Studios, Bang Bang is slated to release on October 2.