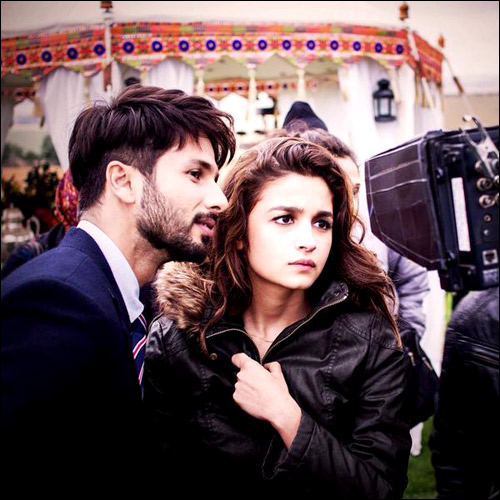 Sometimes filmmakers consider it risky when they cast a fresh pair on screen since the reaction of the audience is always unpredictable. But Vikas Bahl knows how to create good chemistry on screen. In fact his next film Shandaar is a love story where Shahid Kapoor and Alia Bhatt will be seen romancing on screen for the first time.

The film has already gone on floor and we got a glimpse of Shahid Kapoor a few days ago. The actor was then seen bonding with the horse Rocky during the shoot of the film. And now, it was Alia Bhatt's turn to give us a sneak peek into the sets of Shandaar. The Bhatt girl took to Twitter to post a picture of her and Shahid with a caption saying, "SHAANDAAR !!! @shahidkapoor". What caught our attention was the chemistry between Shahid Kapoor and Alia Bhatt which does look pretty impressive considering that they are coming together for the first time. This particular picture has Shahid Kapoor dressed up in a suit and Alia Bhatt is seen sporting a black leather jacket.

It is being said that Shahid Kapoor and Alia Bhatt are playing insomniacs who fall in love as they bond in wee hours trying to pass time during their sleepless nights.

Shandaar is said to be one of the most expensive films with lavish sets. It is a film on destination wedding which is currently being shot in UK and later, will also have yet another schedule in India. Apart from the fresh pairing, the film also has many other firsts. It will see the father-son duo Shahid and Pankaj Kapur sharing screen space and also will mark the debut of Shahid's sister Sanah in Bollywood. Sanjay Kapoor too is a part of this film.