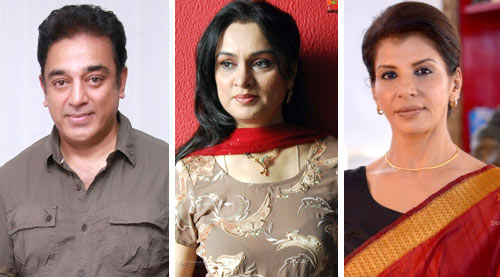 Kamal Haasan: "He has left so much of him in many of us, his understudies. He is not gone totally."


Padmini Kolhapure: "Yet another great filmmaker has left us. Only the most privileged actors get to work with a filmmaker like K Balachander Saab. I was blessed to have been able to be directed by him in Ek Nayi Paheli where I had great co-stars, Raj Kumarji, Hema Maliniji and Kamal Haasan Saab. Only a director of Balachander Saabâ€™s stature could assemble such a cast and do justice to it. He was a great filmmaker and a wonderful human being. His death is a huge loss to Indian cinema. I pray for his soul and strength to his family. I feel lucky to have worked with him. Only those actors who have worked with him know what he was really worth."


Anita Raj: "I had the privilege of working with him in his second Hindi film Zara Si Zindagi which featured Kamal Haasan and me. What a learning experience! He was a great director. I was very fortunate to work with him. I was in awe of him, as Zara Si Zindagi was one of my early movies. He wanted his actors to give not 100 percent but a 110 percent of themselves. Working with Balachander Saab helped me in my later films. I learnt to try to be a perfectionist in my work. He was a hard taskmaster, a perfectionist and a super actor. He enacted the scenes for me. That made my job so much easier. Zara Si Zindagi will always remain very close to my heart. It is one of my best movies with one of the greatest filmmakers."


R Madhavan: He was a legend; a man of vision with a phenomenal understanding of complex human emotions, fearless in his story telling and a compassionate man. I will miss him so much. I had the privilege of working with Balachander Saab in Paarthale Parvasam. This was one of his last works. I am blessed. I feel sorry for actors who havenâ€™t worked with him. He bowled me over with his humility, energy and clarity of thought. He was 75 then. I felt older than him. What an honor to know Balachanderji. He was right on top - a path breaker, game changer and an inspiration for generations to come."