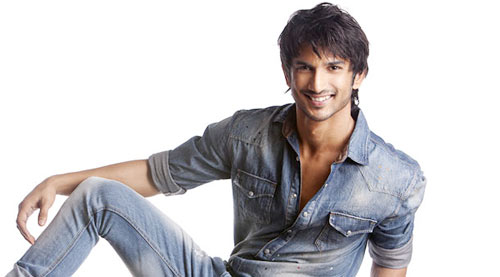 "PK is a Hirani film with Mr Aamir in it, I possibly could not have done anything to make the promotions more effective," said Sushant Singh Rajput in an exclusive interview to Bollywood Hungama's Faridoon Shahryar about his absence from the promotions of PK. It may be a brief role but Rajput has made his endearing presence felt in a film that may become the biggest grosser in Indian cinema ever. He considers Anushka Sharma as arguably the best female young actor today. His sister thinks he looks like a 'hero' after watching PK. The favourable response to Byomkesh Bakshi teaser has been motivating for him. Why can't he talk about Dhoni biopic? And what's the latest on Shekhar Kapoor's magnum opus Paani? For all this and more, dig into this hearty conversation with the actor.


Your role is a small one in PK but it's an extremely endearing one. I believe it was your first film. How do you look back at it?

Well, I am so glad that I got this opportunity to be a part of PK in my first year of debut. To be directed by Mr.Hirani, getting the opportunity to observe how Aamir operates as an actor and working with Anushka, who I feel is arguably the best female young actor we have today was too tempting an offer to resist and I didn't take long to say yes to it even when the length of my role was not much.


You share a crackling chemistry with Anushka Sharma. How was the experience of working with her in Belgium?

There was a slight misunderstanding created before we started shooting for the film so I was kind of hesitant at first but she was quite chilled out and had no airs about herself. As an actor I feel she is gifted. She is so effortless and it would be great if we could find a good script to work together again in the near future.

'Chaar Kadam' has become popular and with the release of the film it's being appreciated even more. How was your experience shooting for it in the beautiful location in Belgium?

The experience was awesome, the locations were so beautiful and it was like, you could keep the camera in any direction and that would be a perfect frame for the shot. The song is so melodious and Anushka and I managed to cultivate some cute moments thanks to the master director.

Your styling in the film is refreshing. Who styled you for the film?

It is Rushi and Manoshi. They are very talented and are also working with me on Byomkesh. I am really thankful to them because after watching this film, my sister, finally in the third film of my career said to me arre yaar tu to hero lagta hai!

How was the experience of being directed by Raju Hirani, one of the finest directors that we have in Bollywood?

I am seriously living my dream. Right from auditions to the shoot, the feeling of getting directed by him was so great. Words cannot be employed to express the feeling. He along with Vidhu Sir told me again and again not to lose the inherent honesty I have while acting and to keep my passion alive. And I will never forget it.


You were missed during the promotions of PK. Why didn't you promote the film at all?

Well, it's a Hirani film with Mr.Aamir is in it! I possibly could not have done anything to make the promotions more effective.


What sort of response have you got for Byomkesh Bakshi teaser?

We have been getting an extremely positive response for the trailer and we are very very excited! There is lots of curiosity and intrigue around the film and we will be coming up with an even more interesting trailer soon.


How is the shooting for Dhoni biopic shaping up?

I cannot comment on it as I have signed a NDA. All I can say is I am doing my preparations for it these days.


What are the plans for Shekhar Kapoor's Paani? The expectations are humungous... what sort of preparations are you doing for this role?

The shooting will begin once I am done with the Dhoni biopic. The pre production is going on as we speak and it's a massive film, something that has never been tried in the industry before so it's obvious it would take time. My preliminary prep is done and I will resume with the preparations once I'm done shooting for Dhoni.