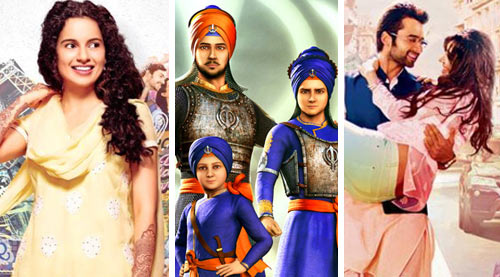 2014 has come to a close and while the year would be notable for one of the lowest strike rates that Bollywood has seen when it comes to films being successful at the box office, it would also be remembered for being a year when number of films - in many cases 4-5-6 - not just arrived together on the same Friday but were virtually unannounced too. What has been all the more surprising is the fact that some of the films backed by respectable corporate houses couldn't find much of a voice either. In certain cases, even those associated with the film (director, actors) were not aware that their film has released.

"Yes, there have been films where corporate houses did not want to spend much on marketing as I am sure they were not sure of recovering these expenses," says prominent distributor Rajesh Thadani.

However, a miniscule release may not be the end of it all though. There have been instances, including Queen, where excellent word of mouth ensured that the Kangna Ranaut starrer turned out to be one of the topmost liked films of the year and gained from strength to strength with every passing show. Same was for Harry Baweja's Chaar Sahibzaade which turned out to be a surprise success of the year, even when it arrived without any promotion whatsoever with a release that was hardly flattering.

Not all films have been that lucky though. Ask Vashu Bhagnani who couldn't agree more. After all, one of his productions closest to his heart, Youngistan, could just not sustain as he believes it just didn't arrive with a proper plan.

"Everything is mechanical now. Our own Youngistan started showing good word of mouth when it released. However, it wasn't given much of a chance to hang on and gain from the kind of momentum that had started coming in. A film like this has to be released well and sustained as it gains from second weekend onwards. But then those who in charge didn't know what to do with it," says Bhagnani.

Well, there may well be a solution in sight. After all, instances like from the past, when even corporate backed films released without much of a hype Dus Tola, Saas Bahu Aur Sensex and Utt Patang (Warner Bros), Teree Sang and Straight (Sony Pictures) and Do Dooni Chaar (Walt Disney)] have far lessened and those in charge have smartened up to either not pick a non-promising film at all or hold it for a while till the time is right.

Says Thadani, "For starters, I feel producers should not start a film unless they themselves have the capacity to release a film with their own money for P&A. In any case, it has become very difficult for non-starcast films and with these kind of releases, I am sure the producers' confidence in corporate houses must be all shaken up." He is referring to Viacom 18's Golu Aur Pappu that released without even its promo going online, hence surprising even its director (Kabir Sadanand).

When one looks at a broader picture, at the end of the day, it is about corporate houses, producers, exhibitors and distributors coming together with a single voice of reasoning and look at a film for what it is worth, while not keeping a myopic view of its fortune just due to absence of a saleable star.

"Currently that's the sad part because even corporate giants are at liberty of multiplex chain-holders, in case they don't have stars in their films," trade expert Atul Mohan talks about the ground reality, "This also may be the reason why corporate houses don't back non-starcast films regularly, as they can foresee release troubles ahead. Still, need of the hour is for the multiplex giants to change their approach towards slotting. All films should be given a fair chance to perform. Let audience decide if a film is worth watching or not. Don't kill the baby in the womb."

He gets a nod of approval from distributor and film business analyst Girish Johar who adds, "Yes, doing a haphazard release is not expected from anyone, as each film has its own merit and should be given a decent chance at the box office in whatever way possible."

Not all hope is lost though as there are some positive minds with creative ideas willing to work on this.

"If we try, all of this can be sorted out amicably," assures Bhagnani, "I have a two-step solution for this. First and foremost, multiplexes should start reserving one out of five screens just for small or medium films. Let a Happy New Year or a Kick get its four screens; it requires that to get its 200-300 crore. However, other films should get this single dedicated screen for a few weeks so that word of mouth helps it. Secondly, on such screens, reduce the ticket prices to Rs. 50-100."

"It is simple mathematics. Calculate the amount collected at the end of the month and you would see that it is substantial. This would also give confidence to corporate houses who would then ensure better release strategy," he reasons, "Also, I can guarantee that no small or medium budget film, if deserving, would flop in such a scenario."

The 100 crore question though is, who will bell the cat? After all, isn't this the prerogative of those who have seen the business up, close and personal for decades to let their voice being heard while bringing all involved on a common platform? After all, any business blooms the best when experience merges with newer ideas, hence resulting in a solution that brings the best of both worlds.