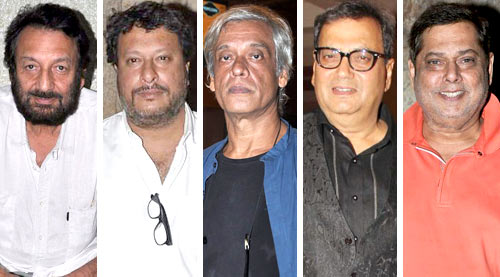 Shekhar Kapoor: "My favourite film of 2014 is Vikas Bahl's Queen because I find Lisa Haydon so so sexy!"


Tigmanshu Dhulia: Haider, because that was true-blue film. The rest of the films in 2014 were circuses. Enough of this tamasha now, please can we have real cinema instead of shit?


Raj Nidimoru: Haider, mainly for the performances, the way it was shot and the ambiance that Vishal Bhardwaj created, Highway for Alia, Randeep and for handling a thin road story in a deft way. Ugly for absorbing narrative, delicious devilish humour and original Indie filmmaking. Queen for KangnaRanaut. PK for simplistic yet original Bollywood entertainment, and for Aamir Khan. Dedh Ishqiya for recreating its own fun world with Naseer and Arshad for the second time. Filmistan for the love for Bollywood and a terrific climax. Suleimani Keeda - very real, new actors and a funny narrative done on a shoe-string budget."


Subhash Kapoor: Queen for its breezy yet revolutionary content and for Kangna's performance. Aankhon Dekhi for its soulfulness. Highway for Imtiaz Ali's treatment and Alia Bhatt's performance. PK for Raju Hirani and the magic he creates each time. Dedh Ishqiya for creating that world of adaas and adaabs that is very rare in Bollywood cinema these days."


Aanand L. Rai: "Queen and Highway are the pick of the lot. Brilliantly performed by Kangna and Alia."