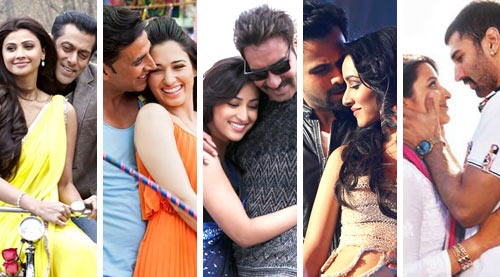 With three movies entering the 200 crore marquee this year, the film business of 2014 has managed to earn some profits. However, when compared to the much more successful 2013, 2014 saw a drastic drop in the way certain films fared. In fact, all the following mentioned movies, despite having extensive promotions and A-list actors/ superstars disappointed with their flawed stories and sometimes, even poor performance.

This was probably the most awaited film of 2014. Considering that Salman Khan returned to the silver screen after not having any releases in 2013, his fans were eagerly awaiting to see the superstar kicking nasty villains. But when it released, it could not touch the expected 200 crore club, instead, received many criticisms not only from film critics but also his fans. May be Salman Khan being preachy just did not work in his favour!

Despite entering the 100 crore club with his previous release Holiday: A Soldier Is Never Off Duty, Akshay Kumar failed to tickle the funny bone in Entertainment. Akshay's fresh pairing with Tamannaah Bhatia, having the dog as the 'hero' and the actor's otherwise impeccable comedy skills did nothing to save the film.

Not everyone has been able to pull off the double role formula with equal panache and this time around, Ajay Devgn too opted for the doppelganger avatar in Action Jackson after playing similar roles in films like Deewane and Yeh Raaste Hain Pyar Ke. But just like these films, Action Jackson failed to make a mark. In fact, despite being a solo release and also promoting it through all platforms, the film received flack from critics and masses alike.

Ungli which saw the light of the day after two years seemed to have a difficult time in grabbing the attention of the audience. An Emraan Hashmi starrer is often hailed as a mass entertainer but Ungli failed to leave up to its image. With a good concept and good performers like Sanjay Dutt and Kangna Ranaut (who also gave a hit this year with Queen), the film which ideally should have earned a fairly good collection at the box office, turned out to be a complete disappointment.

Dealing with a subject like dowry and a frustrated topper, a victim of the crime, should have been a film that could have received applauds. But wrong promotions and too much focus on the aspect of 'food' just ruined it for Daawat-E-Ishq. Even good actors like Aditya Roy Kapur, Parineeti Chopra and veteran Anupam Kher couldn't compensate with their intense performances.

Yash Raj is synonymous with love stories in Bollywood and director Shaad Ali had previously directed the very successful Saathiya. With a performer like Parineeti Chopra, the 100 crore member Ranveer Singh and the comeback of Govinda, Kill/Dil obviously came with a baggage of expectations but the box office remained empty handed. So disastrous were the reviews of the film that it sank without a trace.

Sajid Khan is known for his sense of humour and we have been getting a glimpse of it since the time, he was a host. After films like Housefull and Housefull 2, when Humshakals was announced, we thought that it was time for us to let go off our sorrows behind and enjoy the fun ride. But alas! Many of them only regretted entering the theatres for watching it, so much so, that Bipasha Basu herself had refrained from being associated with the film.

If 2014 was lucky for many, Saif Ali Khan surely wasn't one of them. Not only was the plot of his film Happy Ending being accused for plagiarism but it was being said that the Saif-Ileana love story did not hit the right notes among the rom-com fans. However, apart from the stunning comic act of Govinda, we rarely heard anyone giving a good opinion about the film.

Set amidst the brutal world of North India, Abhishek Chaubey's Ishqiya received accolades for the brilliant performances by Naseeruddin Shah, Arshad Warsi and Vidya Balan. But Dedh Ishqiya paled in comparison. Madhuri's elegant beauty, Huma's bindass act, Arshad's 'womanizing' character and Naseer's 'nawabi andaaz' did not manage to woo the audience the way its prequel did.

Previously, Vidya Balan was considered as the only actress who could pull off a film solely on her shoulders without a hero. But it seems that the adage is not true anymore. Bobby Jasoos where she played the detective trying to find grounds in a male dominated profession in Hyderabad, not only earned low collections at the box office but the actress added yet another film to her series of flops after Ghanchakkar.

Yet another film of Emraan Hashmi got added into this list! From seeing him play a bookie to an arms dealer to a gangster, Emraan's grey roles have always got him the required love from the masses. But his con-man act in Raja Natwarlal failed to hit bull's eye. In fact, the film was constantly promoted for months across cities in varied platforms and the debut of Humaima Malick, a Pakistani import, equally generated curiosity. But when the film released, none of these factors really contributed to the box office earnings.