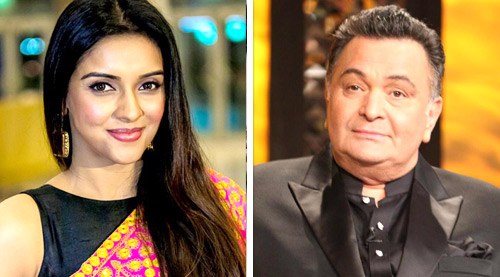 When we broke the news of Asin's decision to tie the knot with Rahul Sharma, little did we know that the actress would come out with a confession a day later to stop all speculation.

Now that Asin has confirmed her marriage plans, Rishi Kapoor who plays her boyfriend's father in All Is Well, is very happy for her.

Says Rishi, "We knew she was very seriously involved with Delhi businessman Rahul Sharma. In fact she has stopped signing any more films. All Is Well is the only film she signed recently. I was just so happy to see her so content in love. Ab bahot kaam kar liya. She was been working since for a long time. The girl deserves happiness."

In the film All Is Well Asin is cast as Abhishek Bachchan's soulmate who is a reluctant witness to her boyfriend's constant bickering with his father.

All Is Well would be Asin's farewell film. Unless she makes a comeback after marriage.

The marriage, say friends, is likely to happen early next year.

Twinkle Khanna posts a picture with a witty…