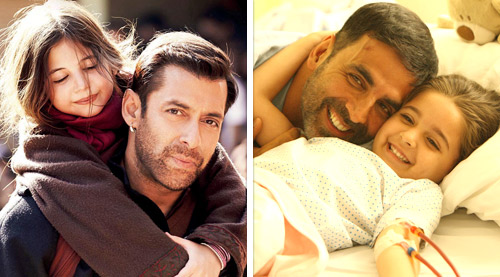 After the spectacular success of Bajrangi Bhaijaan, relations between India and Pakistan may or may not improve. But the bond between the leading man Salman Khan and his

pretty little co-star Harshaali Malhotra has certainly fired off the parental instinct in our Bollywood superstars.

While Salman's bonding with Harshaali is creating waves in several parts of the world, it is now another A-lister superstar Akshay Kumar's turn to share filial vibes with another 6-year old girl.

And before we can wipe our tears at our macho heroes going all soft and tender over their adorable little screen partners, we will have another action hero John Abraham sharing a very special

John's little co-star is Diya Chalwad, who plays John's 6-year old neighbour whom he grows attached to and goes berserk when she is kidnapped.

According to director Nishikant Kamath, the relationship between John and the little girl in Rocky Handsome is as central to the plot as in Bajrangi Bhaijaan.