Last Updated 07.02.2023 | 2:31 PM IST
feedback language
follow us on
Bollywood Hungama » News » Bollywood Features News » Arjun Patiala: Kriti Sanon has the most hilarious response to Kapil Sharma when he asked her why she was sad on his wedding day!

Keeping up with the promotional ritual, Diljit Dosanjh and Kriti Sanon were recently seen attending reality shows for their forthcoming Arjun Patiala. The spoof comedy has already won hearts with its rib tickling trailer and their recent presence in the fun chat show hosted by Kapil Sharma as a part of promotions was no less than a laughter riot. Along with introducing the talented actors on his show, Kapil decided to follow his usual style of flirting with the pretty actress but this time around, Kriti had a perfect response to Kapil’s questions! 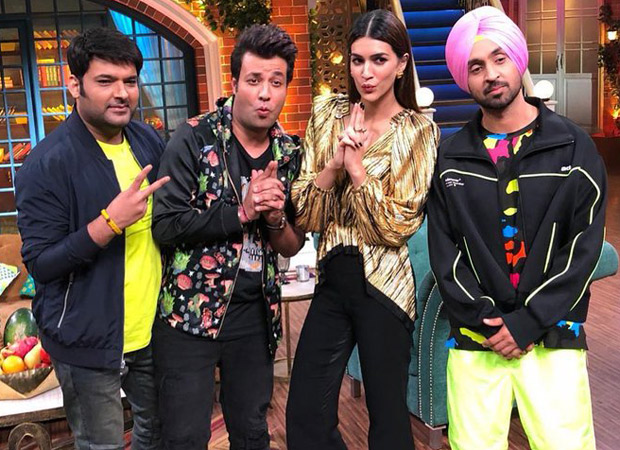 Arjun Patiala: Kriti Sanon has the most hilarious response to Kapil Sharma when he asked her why she was sad on his wedding day!

In a recently shared video on Instagram, Kriti Sanon and Diljit Dosanjh were seen having a gala time during The Kapil Sharma Show. While we can’t wait to see the episode, the video showed us glimpses of the hilarious moments from the said show. One of them was when Kapil Sharma quizzed Kriti, why she was sad on the day of his wedding. To the same, the actress gave a perfect reply as she said, “I was sad for the girl”, thereby leaving everyone around in splits. If that wasn’t all, Punjabi superstar Diljit Dosanjh too was in his elements which only added to the fun quotient. Here, have a look at the video:

A post shared by Sony Entertainment Television (@sonytvofficial) on Jul 22, 2019 at 5:45am PDT

Arjun Patiala also stars Fukrey fame Varun Sharma and it is directed by Rohit Jugraj. The film, produced by Maddock Films of Dinesh Vijan, is expected to hit the big screens on July 26.