Comedy is an established genre in Bollywood. Since audiences are now ready for hatke stuff, filmmakers are constantly trying to push the boundaries in the existing genres too. This Friday coincidentally sees the release of two such films, although both the movies are as different as chalk and cheese. While JUDGEMENTALL HAI KYA has violent undertones, the other film – ARJUN PATIALA – is like a spoof comedy, on the lines of famous Hollywood films like SCARY MOVIE and DEADPOOL. Bollywood has rarely made such films and one recent film in this space was WELCOME TO NEW YORK [2018]. It was a huge failure in all respects and now its lead actor Diljit Dosanjh appears in another spoof film, ARJUN PATIALA. So does ARJUN PATIALA manage to entertain and emerge as a pioneer of this genre in Bollywood? Or does it fail to entice? Let’s analyse. 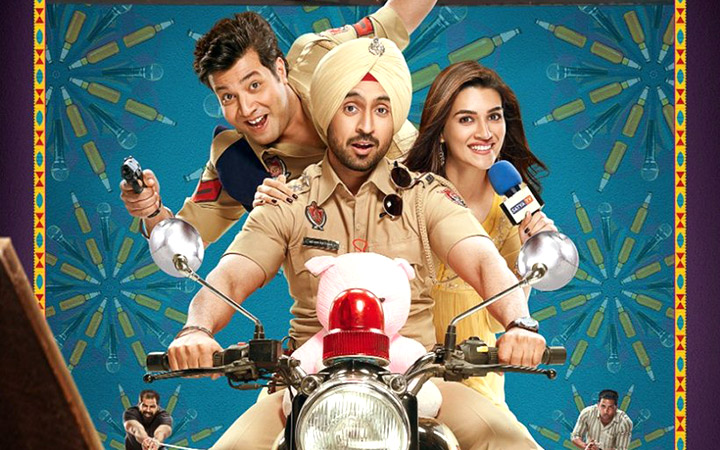 ARJUN PATIALA is the story of a cop trying to achieve a crime-free district. A struggling director (Abhishek Banerjee) meets a rich third-generation producer (Pankaj Tripathi). After ensuring that the director has put all the necessary ‘ingredients’ needed for a masala entertainer, the producer allows the narration of the script. The director then starts to tell his story – that of a police officer named Arjun Patiala (Diljit Dosanjh). He becomes a sub-inspector through sports quota and he is posted at Ferozpur Police Station in Punjab. Within a few days, he falls for Ritu Randhawa (Kriti Sanon), an honest reporter working for Tezz News Channel. He is also visited by his senior, DSP Gill (Ronit Roy). Arjun looks up to him since childhood and he is the reason why he decided to be a cop. DSP Gill shares with him his dream of making Ferozpur a crime-free district. Ritu meanwhile helps Arjun in sharing the list of baddies in the area. There’s Baldev Rana (Amit Mehra) who is so brash that he even beats up police officers if they come in his way, Sukool (Mohd. Zeeshan Ayyub) who runs a brick kiln, his brother Anda (Sumit Gulati) and finally Dilbaug Singh (Himanshu Kohli) who runs his business from jail and also has haemoglobin problems. Arjun devises a plan – he generates a gang war between them, hoping that they’ll all kill each other and hence DSP Gill’s dream will be achieved. However, there’s also MLA Prapti Makkad (Seema Pahwa) who seems to be the biggest villain of all and also has ulterior motives of her own. What happens next forms the rest of the film.

Rohit Jugraj's direction is smooth for most places but with such a poor script, there isn’t much he could have done. At a few places however, he rushes through the film and this was avoidable. For instance, it’s never properly established why Sukool agrees to bump off other villains in the district. A few more minutes should have been spent in establishing the tensions between the various gangs. If Rohit had done the needful, the end result would have been better but still, the film would have emerged as a disappointment as the content itself is not worth it.

ARJUN PATIALA begins on a great note. The manner in which the producer and director converse over the ‘masala’ script is interesting. The opening credits sequence, a spoof on James Bond style of films, is witty. But soon, one realizes there’s nothing much happening in the film. Yes, there are a bunch of villains but they are not utilized properly. In fact, after a point, the film stops being funny. A few scenes are interesting here and there like Sukool assassinating Baldev Rana or the way romance blooms between Arjun and Ritu. But these are few and far between. The twist in the tale in pre-climax is something that one can see from miles away. The finale is hardly funny and reeks of lazy writing.

Diljit Dosanjh is apt as the cute and naughty police officer. He genuinely plays his part and tries to rise above the script. Varun Sharma (Onida Singh) is likeable although he’s repeating himself now. Kriti Sanon is also sincere and plays the entertaining part well. The sequence where she narrates her tragic part is where she gives her best. Sadly, the makers spoil the show with an animated flashback running below on the screen and it takes away the impact of her performance too. Mohd. Zeeshan Ayyub is the best amongst the villains. He shines and it’s sad that such a cool villain won’t get his due to the bad script. Ronit Roy fits the part to the T. Seema Pahwa is decent. Amit Mehra, Himanshu Kohli and Sumit Gulati get no scope. Biswapati Sarkar (Editor of Tezz News Channel) is appropriate. Ritesh Shah (Arjun’s father) and the actor playing her mother are poor. Sunny Leone (Baby) is sizzling. Pankaj Tripathi and Abhishek Banerjee are the funniest in the film.

Sachin-Jigar's music is nothing compared to their previous works. ‘Main Deewana Tera’ has the chartbuster feel but doesn’t have a long shelf life. ‘Crazy Habibi vs Decent Munda’ is situational. ‘Dil Todeya’ and ‘Sachiya Mohabbatan’ are okay. ‘Sip Sip’ is played during the end credits. Ketan Sodha's background score is theatrical.

On the whole, ARJUN PATIALA is a shockingly poor fare, riddled with an outdated and tragic script. At the box office, it will be rejected outright by the cinegoers.

Arjun Patiala: Kriti Sanon has the most hilarious response to Kapil Sharma when he asked her why she was sad on his wedding day!

A great watch which is evenly balanced. with a big dose of comedy. Really worth watching movie.…