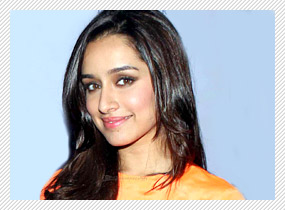 There is something very righteous about Shraddha Kapoor. It shows in her eyes. On screen when she performs her eyes never lie. Neither does the pretty girl take solace during interviews in self-delusion like some of her contemporaries do.

Though she admits Aashiqui 2 was almost like a beginning for her, Shraddha doesn't disown the films that she did before Aashiqui 2.

"I did three films before Aashiqui 2. And I am proud of all of them. If I hadn't made my debut in Leena Yadav's Teen Patti I wouldn't have done Aashiqui 2. Teen Patti gave me a taste of failure."

Not many people know Shraddha was almost selected and then rejected for Sanjay Leela Bhansali's Saawariya.

She candidly admits to the initial setbacks. "I was replaced in some films. Of course a lot more people saw me in Aashiqui 2 than Teen Patti. I had a fab role in it. My character in Aashiqui 2 got me so much attention. If you look at it that way then yes, Ek Villain is like the post-debut film."

Shraddha sees her life undergoing a change now. "In Aashiqui 2 we were one small family working hard to make a name. That film changed our lives on one Friday."

Tease her about her hiked fee and she laughs, "Money-wise, then I am just getting there I've to admit in Aashiqui 2, I wasn't paid anything close to what I got for Ek Villain (laughs). Emotionally, Aashiqui 2 made me very rich. And that's the best wealth money can't buy."

Shraddha has suddenly come into her own now. She selects to be humble about her stardom. "I am grateful. For what I've received after Aashiqui 2. After the first three flops I could've disappeared."

However her feelings about film projects being announced without her consent are at best, mixed. "Nowadays I love the way my name comes up in projects. But I don't get flattered when my name is announced without my confirming the projects. Premature announcements tend to confuse the trade. It also creates ill-will and bad blood. I am not one for false news reports at all."

She confesses she is not impervious to adverse press. "Good or bad, untrue reports embarrass me, no matter how flattering. And gossip about my personal life just makes me so sad. They are so unfounded."