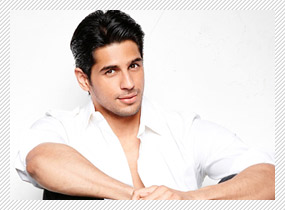 While one waits to see what Riteish Deshmukh and Shraddha Kapoor have to offer in Ek Villain, it is Sidharth Malhotra who seems to be the surprise element. In fact it won't be erroneous to state that one remembers the early innings of Shahrukh Khan who started with a couple of lighter films in Bollywood before showing a different facet of his acting talent with Baazigar.

"See, whenever you give something new to the audience, there is bound to be a surprise element coming into play," says Sidharth while adding, "Of course, Ek Villain is something that I have not done before. Now if the response to promos is any indication, everything's going well so far. In any case, that was the whole point of choosing a film like this, which is to make the audience wonder what Sidharth is up to. Even in my head there was a lot of challenge in store though, since there was no reference point whatsoever. I had to imagine a lot of things on my own and then approach the character; it wasn't easy."


What also matters is the way in which the trade and industry in general looks at an actor, especially in the times when many out there are putting their money on fresh blood. Isn't Sidharth more comfortable with the fact that producers and directors who matter are looking at him differently today?

"Of course, the way they deal with you personally is a reflection of how you perform on screen," says Sidharth. He continues, "If they like what you have done in front of the camera, they meet you with a lot more excitement. I know for sure that everyone is looking for new performers in the industry. Especially for someone like me who is an outsider, such sort of acceptance is most welcome as it is only through my acting talent that I can win people's hearts. If someone out there believes in you and says that here is this person who is here to stay and can act and perform, it is comforting for me as an actor."

No wonder, every good word matters for Sidharth since it wasn't a dream beginning for him when he stepped into Bollywood. Not many are aware that it was a period of struggle for the Delhi boy when he stepped in Bollywood. He was all set to begin work as an actor on a biggie which eventually was shelved. Just when things seemed to be a little stark, an opportunity came his way in the form of turning an assistant for Karan Johar on My Name Is Khan.


Close to half a decade down the line, it is a form of redemption for Sidharth to be in the thick of things.

"Yes, I feel a little relaxed mentally since the films which I am doing today are a validation of sorts," says Sidharth. "You get these positive emotions that you are starting off well now. Having said that, I won't deny that there was this angst which I was carrying for years and Mohit got it all out of me in Ek Villain. I have finally dealt with all my issues by doing this emotionally intense film."


It would be interesting to see how it all comes across on screen when the film releases all over this Friday.