The makers of '83 have been treating the audience with the first looks of all the characters who brought the World Cup home in 1983. The most recent to join the league is Dhairya Karwa who will be essaying the character of Ravi Shastri. 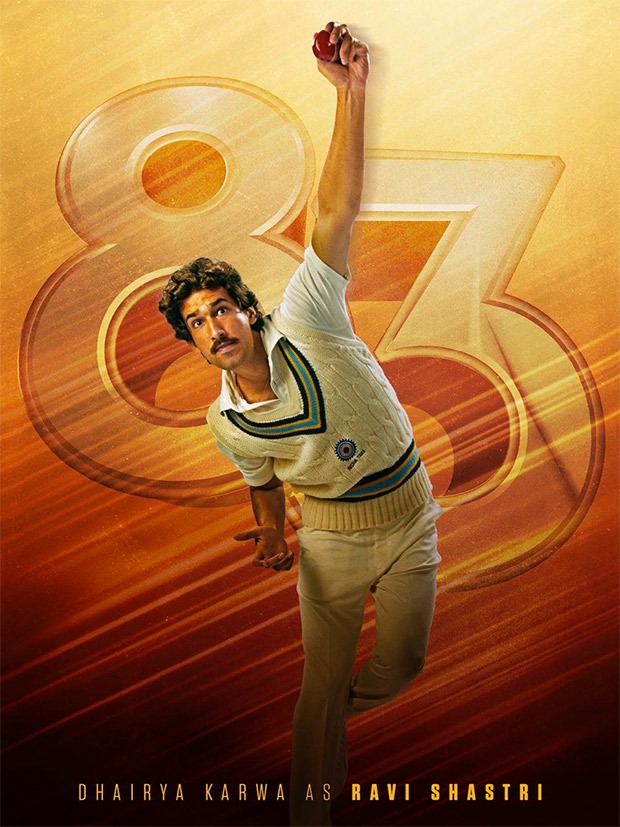 As a batsman, Shastri was essentially defensive with his trademark "chapati shot”, popularly known as a flick off the pads shot where he also possesses the ability where he could raise his strike rate when required.

Taking to their social media, the makers posted, “The youngest player who left a mark on everyone with his Chapati shot! ???? Presenting the next devil, #RaviShastri! ???? #ThisIs83 ”

Ranveer Singh also shared the poster on his social media with the caption, "BABYFACE ASSASSIN!!! ???????????? The youngest gun amongst the Devils...Presenting #DhairyaKarwa the flamboyant all-rounder
@RaviShastriOfc! #ThisIs83."

The entire trail of first look-reveal posters has been garnering tremendous appreciation from all across. From bringing along the nuances to bearing an uncanny resemblance to the real-life personalities, the new poster is definitely winning hearts.

Touted to be the biggest sports film of all time, '83 is being co-produced by Madhu Mantena, Sajid Nadiadwala and Reliance Entertainment. The movie is based on the victory of the Indian cricket team in the Cricket World Cup 1983 lead by the all-rounder Kapil Dev.

The film has already garnered immense appreciation when the first look of Ranveer Singh as Kapil Dev came out in the iconic 'Natraj Pose'. Recently the makers also shared the logo from the movie with the iconic and the most significant number of the history of our sports- 83. The film '83 is all slated to hit the screens on 10th April 2020.