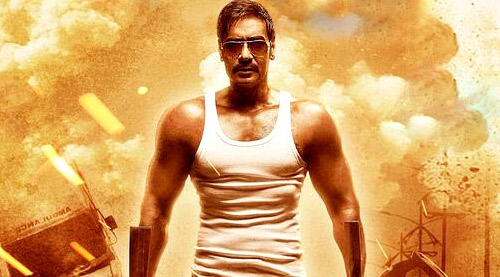 Five things that have changed from Singham to Singham Returns

1.  From a super menacing villain (Prakash Raj), it is time for a super clown villain (Amol Gupte) to enter the scene. When the former threatened, you really felt that he was up to something dangerous. When the latter issues a warning, you want to just ROFL. If former brought in some sense of semblance in his act, latter was happy to just ham it up.

2.  In Singham, it was mainly pistols that did all the talking. However for the film's sequel, Rohit Shetty decided to go the Rajiv Rai way. So in good old late 80s/early 90s fashion, it was time for machine guns to go rat-a-tat-a-tat. Taking cue from Sanjay Dutt's firing-with-pistol-in-each-hand fashion statement, Ajay went a step ahead by picking up two machine guns and make it all look like a walk in the park.

3.  In Singham, when it came to fighting it out with the baddies, Ajay did things mostly on his own, some of which included uprooting a lamp post and beating the pulp out of the goons with it. In Singham Returns, he has his trusted lieutenant Daya to do the tough job of breaking the doors. No wonder, the cheers are the loudest when Ajay screams - 'Daya, darwaaza tod'!

4.  Singham was based on a namesake Tamil film starring Suriya. Though Suriya too went on to make a sequel, the one put together by Rohit Shetty and Ajay Devgn has absolutely no connection to it.

5.  Singham had created a record of sorts by roping in an all-Maharashtrian supporting cast, right from Sachin Khedekar, Ashok Saraf to Sonali Kulkarni. Singham Returns has been flexible in that department with Anupam Kher, Zakir Hussain and Sharat Saxena joining in, amongst others.

Five things that have remained just the same

1.  Both films were surrounded with controversies. Some shows of Singham had to be cancelled from theaters in Karnataka when certain groups protested with regards to usage of derogatory statements against the Kannadigas. On the other hand, Singham Returns had to face protests soon after the promo was out when a Hindu organization urged Censor Board to ban the film on grounds of depiction of Hindu saints in a bad light. Resultantly, a few words had to be re-dubbed in the final cut.

2.  The leading lady (Kajal Aggarwal) didn't have any contribution to make in Singham. The treatment meted out to the heroine (Kareena Kapoor) in Singham Returns is just the same as well. Oh yes, both had a song apiece too!

3.   There is always another cop to give Ajay a reason good enough to fight it out with the rest of the world. Singham began with the suicide of Sudhanshu Pandey. On the other hand, Singham Returns had the killing of Ganesh Yadav establishing the core plotline.