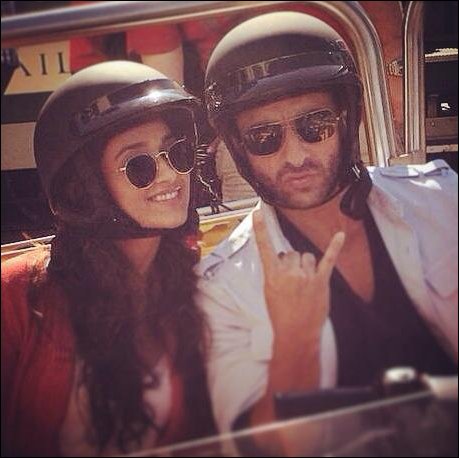 After the Humshakals debacle, Saif Ali Khan is now back on his feet as the actor is busy wrapping up the shoot of two films simultaneously, out of which, one is Happy Ending directed by Raj Nidimoru and Krishna D. K who previously even directed the Saif starrer Go Goa Gone. Happy Ending has been shot extensively in California and the female lead of the film, Ileana D'Cruz recently took to Twitter to post a picture with Saif Ali Khan, where the two are seen bonding on the sets of the film as they go karting.

Wishing her co-star 'Happy Birthday', Ileana D'Cruz posted this picture which is taken from a song sequence in the film that was shot in the popular Zig Zag Street in San Francisco. Ileana plays Saif's love interest and a popular author in the film. Saif Ali Khan too plays a novelist in the film, who faces downfall in his career after his debut book becomes one of the bestsellers.

Produced by Illuminati Films, Happy Ending also stars Kalki Koechlin, Govinda along with cameos by Preity Zinta and Saif's wife Kareena Kapoor. The film is slated to release on December 5, 2014.

Saif Ali Khan is also busy shooting for Phantom which will be directed by Kabir Khan of Ek Tha Tiger fame and it also stars Katrina Kaif. Produced by Sajid Nadiadwala and UTV Disney, Phantom is slated to release on April 3, 2014.