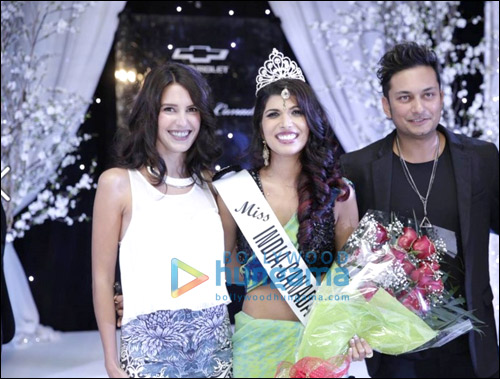 In a month from now, Isabelle Kaif would be making her big screen debut with Dr. Cabbie, a light hearted comedy which features Vinay Virmani (Breakaway, David) in the title role. With the film now just weeks away from its international release (it would first hit the Canadian screens in September), it is time for the cast of the film to up the ante when it comes to marketing and promotion.

No wonder, in a cross-promotion event, Isabelle Kaif recently attended the Miss India Canada pageant that was held in Toronto.

Informs our source, "Slowly but steadily she is making her presence felt in the international media. She was invited at the pageant as the honor. But naturally, all eyes were on her. The film boasts of an ensemble cast with Isabelle playing a very crucial role in this Jean-Francois Poulliot directed affair," informs our source.

Though paparazzi is (thankfully) yet to hound celebrities in Canada, Isabelle attracted good attention. Reports state that given her lineage (being Katrina Kaif's sister) and the fact that she is a new face, she was mobbed for photographs and pictures.

"Yes, in fact the event organizers had to keep additional security around her," the source adds, "While she was definitely around to promote Dr. Cabbie as her film, she also gave a very motivating speech to all the young South Asian women on the subject of following one's dreams. While she interacted with both the mainstream and South Asian media, what made the event further special was the interaction she had with Miss India Canada."

The highlight though was when the trailer of this Salman Khan Being Human [SKBH] Productions' offering (which is being distributed by Eros International) was played for a large gathering. While there was laughter and applause galore, enquiries did come her way around her entry into quintessential mainstream Bollywood flick.

"Given her charm, Isabelle did keep the media guessing," quips an associate who was accompanying here, "Of course there have been ample feelers that have come her way. However, she is concentrating entirely on Dr. Cabbie. It is a first major step for her to woo audience internationally. She wants to get it just right with her debut outing."