This is what happens when two giant producers come together to make a film; the expectations touch the sky. Karan Johar as well as Sajid Nadiadwala have delivered countless hits, superhits and blockbusters independently. Now that they are coming together for Kalank, one looks forward to the kind of success that this multi-starrer period drama turns out to be. 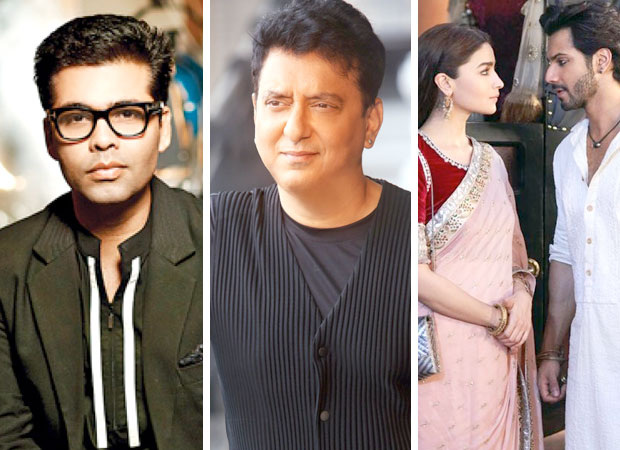 "Both Karan as well as Sajid love larger than life cinema. They have been huge fans and followers of Bollywood cinema themselves and that reflects in the films that they make. They want people to watch their films on the big screen and hence the production values are always impeccable. The focus is not just on getting the right stars for their films, they take care of the entire package by means of setting up the film correctly right from the scripting stage itself," says a common associate.

No wonder, both Sajid and Karan have been around for more than a couple of decades and still going strong. "Sajid's biggest success till date is Salman Khan's Kick and that was a film which he directed as well. It went on to collect Rs.232 crores. On the other hand Karan is basking on the success of Simmba which is his biggest till date for a film bearing his name as a producer. The Ranveer Singh starrer accumulated Rs.240 crores. Both these films have garnered huge numbers," an observer comments.

What is all the more remarkable about the films coming from Dharma Productions as well as Nadiadwala Grandson is that the opening has been consistently good. "Sajid Nadiadwala's Kick had opened at Rs.26.52 crores whereas Baaghi 2 broke the ceiling when it collected Rs.25.10 crores on its first day. On the other hand Karan too had gone past the 20 crores mark thrice when it comes to the opening day numbers. Agneepath [Rs.23 crores], Kesari [Rs.21.06 crores] and Simmba [Rs.20.72 crores] were all very huge," the observer continues.

While the recent as well as distant past for films coming from the two producers has been truly impressive, it is time to look ahead for both Karan as well as Sajid, considering the kind of hype that Kalank has generated during the last few weeks.

"This is the first true blue multi-starrer of 2019," a prominent distributor says, "You have the superhit jodi of Varun Dhawan and Alia Bhatt coming together along with Sonakshi Sinha and Aditya Roy Kapur. Then of course there is the iconic pairing of Sanjay Dutt and Madhuri Dixit who have delivered so many successes together in the 90s. With a set up like this and the period setting of partition, one definitely expects a big screen extravaganza."

No wonder, bets are being placed on the film taking a mammoth opening when it releases this Wednesday. "There is a partial holiday of Mahavir Jayanti on Wednesday and that should aid the collections by around 20%. Bare minimum number of Rs.20 crores is expected to come in. However, one can expect a much bigger number. The added push that the film gets could well be the deciding factor between Kalank stopping around the Rs.20 crores mark or going past the Rs.25 crores milestone. If it indeed turns out to be the biggie that it is expected to be then Sajid Nadiadwala and Karan Johar could well be set for their biggest opener ever," the distributor adds.

If that truly happens, Kalank would also enjoy the status of being the biggest opener of the year, hence surpassing Kesari which had collected Rs.21.06 crores on its first day. Biggest opening day of Sajid Nadiadwala and Karan Johar films: