A few years ago, Sunny Deol and Sakshi Tanwar starrer Mohalla Assi's trailer was unveiled which had all the actors mouthing expletive language. This had led to a stay ordered by New Delhi Court in 2015 due to which the film had not released in India officially.

After two year-long battle, Mohalla Assi has finally received a certificate from Central Board of Film Certification. The CBFC has given 'A' certificate to the film. It was announced on Wednesday afternoon that the film will finally hit the theatres and the release date will be announced soon.

Releasing an official statement, the producers, Crossword entertainment said, "After a prolonged legal battle, we have received a judgment favouring our argument and CBFC has now issued an A certification for the movie. Justice has been served .The movie, without any cuts, is all set to be released in theatres shortly.” 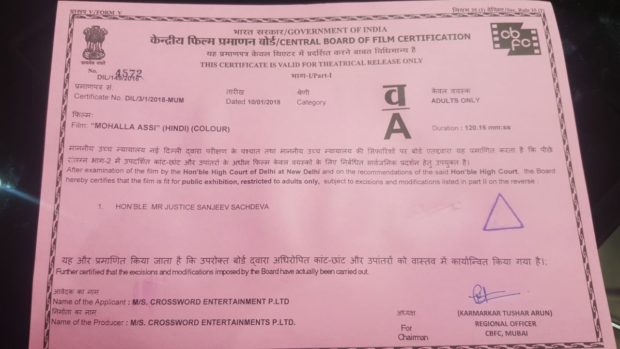 The problems for Mohalla Assi began when the makers submitted an application to CBFC in March 2016. However, the revising committee had refused to issue the certificate stating the film was hurting the sentiments. The makers, then, appealed the Film Certification Appellate Tribunal (FCAT). They were directed to carry 10 cuts/ modifications and resubmit the film. As the said cuts were affecting the film, the makers challenged in the Delhi High Court through a writ petition, thereby receiving the certificate.

Mohalla Assi is based on a book Kashika Assi which is written by KashiNathSingh. The story follows the events through 1990 and 1998 including Ram Janmabhoomi movement and Mandal Commission implementation. Directed by Dr. Chandraprakash Dwivedi, the film stars Sunny Deol, Ravi Kishan, Sakshi Tanwar.

“I am in the mood for action, and so is the…